SINGAPORE - The Muslim community should continue to build relationships with people of different races, languages and religions, said Minister-in-charge of Muslim Affairs Masagos Zulkifli, as Muslims everywhere celebrated the end of the holy month of fasting.

Speaking to reporters after Aidilfitri prayers at the Sultan Mosque on Wednesday (June 5), he said Muslims in Singapore live in a multi-religious society that has been built over time, and there is a need to maintain social harmony.

"In times of crisis, or acts of terrorism even, this relationship will be tested. When your relationship is strong during (peacetime), I'm sure it will be stronger during a crisis," said Mr Masagos, responding to a question about the Hari Raya Aidilfitri sermon delivered by Mufti Fatris Bakaram earlier.

Dr Fatris had urged the 5,000-strong congregation, including President Halimah Yacob, who was there with her husband, Mr Mohamed Abdullah Alhabshee, to cherish and safeguard religious diversity.

"We have been able to practise our religious values peacefully in this plural society. However, this does not happen by chance," he said, noting that incidents have occurred elsewhere.

Singapore's highest Islamic authority added: "Differences can lead to misunderstanding and mistrust between communities. It can potentially cause discord and disunity. The differences have also incited hatred to the extent that it caused terror and fatalities."

In his sermon, read by imams in all other mosques here, Dr Fatris said Ramadan is a time to strengthen desired Islamic values, such as patience and discipline, while enduring hunger and thirst during the fasting period. 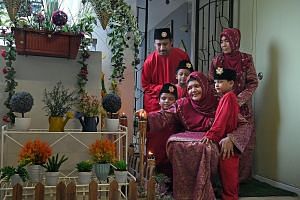 "Ramadan shows us that we can fulfil our religious obligations without forsaking the spirit in achieving progress and goodness in our worldly affairs," he said.

"It does not prevent us from contributing to the community, rather it inspires the spirit of mercy and compassion."

Responding to the sermon, Mr Masagos said Ramadan encourages empathy for the needy and added that he hopes this would "translate into acts of charity and acts of spreading mercy to everybody."

"If we can practise this message of Islam, I'm quite sure the image of Muslims will be one which is positive for everybody," he said.

All 70 mosques in Singapore conducted Aidilfitri prayers, which mark the end of Ramadan and a day of victory after a month of fasting.

Dr Fatris also said the holy month has fostered a healthy culture, as people are more aware of the need to take care of their health by practising moderation when breaking fast and preparing healthier dishes.

It has also encouraged responsibility in taking care of the environment, as believers are encouraged to bring their own containers when getting food at the mosques, to reduce the use of disposable items.