The Malay/Muslim community here can play its part in building Singapore's shared future under a series of engagements to get its views on issues affecting it and the nation, said Minister-in-charge of Muslim Affairs Masagos Zulkifli yesterday.

He said his team of fourth-generation Malay/Muslim leaders have been charting the way forward, but also need the community to work with them.

Earlier this year, Deputy Prime Minister Heng Swee Keat had said the Government would partner Singaporeans in new ways to design and implement policies together.

In his speech yesterday, Mr Masagos, who is also Minister for the Environment and Water Resources, said: "Building our future Singapore together involves partnering Singaporeans in new ways to deliver solutions, drawing on the diversity of passions and expertise among Singaporeans to strengthen our community and nation."

The Co-creation@M³ series of engagements will be led by Minister of State for Manpower and National Development Zaqy Mohamad, he added.

Mr Zaqy said that through the initiative, the leaders hope to engage the Malay/Muslim community, particularly the youth and professionals, to share their perspectives.

Building our future Singapore together involves partnering Singaporeans in new ways to deliver solutions, drawing on the diversity of passions and expertise among Singaporeans to strengthen our community and nation. 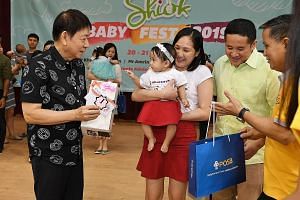 He was speaking after an event at Wisma Geylang Serai, a social and cultural heritage hub, where 10 exemplary individuals were recognised as part of a #InspirasiSG campaign that celebrates inspirational stories from the Malay/Muslim community.