The rules have been tightened for users of electric scooters and other personal mobility devices (PMDs), following several accidents and an alarming increase in the number of devices that have caught fire.

From July 1, it became an offence to ride an unregistered e-scooter on public footpaths. Owners of such devices can receive a $100 incentive if they dispose of their PMDs early.

But it was the ban of e-scooters from 5,500km of footpaths that grabbed headlines. This was after the death on Sept 25 of Madam Ong Bee Eng, who was on her bicycle when it collided with an e-scooter.

Even as the rules were tightened for safety reasons, steps were taken to help about 7,000 food delivery riders affected by the footpath ban for PMDs.

A $7 million package was rolled out to encourage those affected to switch to alternatives such as power-assisted bicycles (PABs).

In the shared bicycle space, high operating costs and other reasons forced ofo and Mobike to exit the market, with oBike already having exited in June last year. Home-grown SG Bike is now the largest bike-sharing operator here.

Mounting accidents and close shaves with pedestrians meant that further legislation and restrictions on PMD use were inevitable.

Pavements here - with the exception of shared cycling paths - are too narrow to accommodate both pedestrians and PMDs that can accelerate quickly. Minister for Transport Khaw Boon Wan revealed that 299 people were treated in hospital for PMD-related incidents last year, including 259 riders and eight pedestrians.

Of those numbers, 63 per cent of the injuries were minor, 21 per cent were moderate, while 16 per cent was classified as severe.

Eighty-nine per cent of the injuries were considered minor, 7 per cent moderate and 4 per cent severe.

Meanwhile, there were 73 PMD-related fires in the first nine months of this year, nearly on a par with the 74 for the whole of last year.

From Jan 1, the Land Transport Authority (LTA) will adopt a zero-tolerance approach towards PMD riders who flout the rules and continue to ride on footpaths.

The ban kicked in on Nov 5, and according to the LTA, 3,444 warnings were issued to e-scooter riders in the same month.

If convicted, those caught riding on footpaths can be fined up to $2,000 and jailed for up to three months. 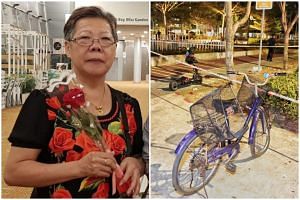 About 3,450 warnings issued to PMD riders since footpath ban

The certification system evaluates PMDs on the safety of their electrical systems. Many of the devices that caught fire were non-UL2272 certified.

E-scooters that do not pass the inspection cannot be used on public paths. The authorities have also said that other measures will be rolled out. These include a theory test for e-scooter and e-bike riders before they can ride in public, and third-party liability insurance for workers riding mobility devices in the course of their work.

E-scooter riders must be at least 16 to use the devices on cycling paths, or be accompanied by an adult.

Implementation and other details have not been announced yet.

The silver lining for PMD riders is that LTA has unveiled plans to expand the current 440km of cycling paths islandwide to 750km by 2025. This will be tripled by 2030, the same year that all HDB towns get their own cycling networks.

Senior Minister of State for Transport Lam Pin Min said earlier this week that the Government is looking to speed up plans by a couple of years.

Shared paths must be quickly built so that the benefit of e-scooters as a clean and efficient last-mile option is not lost amid the legislative furore.

With the Government encouraging active mobility, micro-mobility solutions such as e-scooters and PABs should form part of the solution, together with education and enforcement in equal measure.