SINGAPORE - Tengah Air Base will be expanded, with several private land plots acquired, graves exhumed and a road realigned, the Ministry of National Development, National Environment Agency and Singapore Land Authority (SLA) said in a statement on Tuesday (July 18).

The expansion is to accommodate some of the assets and facilities from Paya Lebar Air Base, which is being relocated - freeing up 800ha of land in the north-east, and to ensure operational readiness of the Republic of Singapore Air Force (RSAF).

Here are six things you may want to know about the Tengah area.

1. Government to acquire 106ha of land to expand Tengah Air Base

A total of 106ha of land - about a quarter the size of Clementi town - will be acquired by the Government to expand Tengah Air Base.

The expansion of the Tengah military airbase of the Republic of Singapore Air Force (RSAF), located in the western water catchment, will see the acquisition of several private land plots and the exhuming of more than 80,000 graves in Choa Chu Kang Cemetery.

The existing Lim Chu Kang Road, including a portion of a Heritage Road at its northern segment, will also need to be realigned.

2. Tengah's 'Forest Town' will be the first HDB town to be developed in 20 years

The first flats at the new town in the west, the first to be developed since Punggol about 20 years ago, are set to be launched in 2018.

The area today is largely forest and scrubland, but will eventually have 42,000 new homes: 30,000 units of public housing and 12,000 units of private housing.

Plans to develop Tengah, a 700ha site bounded by the Kranji and Pan-Island expressways, Brickland Road and Bukit Batok Road, were mooted as early as 1991 in a concept plan for Singapore in the future.

The town will include a 100m-wide, 5km-long forest corridor linking it to the surrounding green network between the western and central catchment areas.

All about Tengah Town

3. Sungei Tengah will be a focal point for animal welfare groups

Sungei Tengah, which is already home to the headquarters of the Society for the Prevention of Cruelty to Animals (SPCA) and Animal Concerns Research and Education Society (Acres), will welcome more animal welfare groups soon. 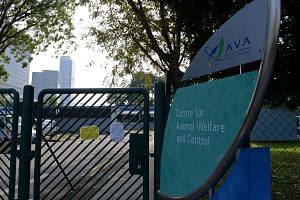 New facilities at Sungei Tengah will be built for around 40 animal welfare groups and pet farms which are in Loyang and Seletar, but which will need to move out of their premises when their leases expire by the end of this year, the Agri-Food and Veterinary Authority (AVA) said in November last year.

The 29 farms, nine groups and several independent shelters will move from their current homes, bringing with them 6,000 to 7,000 animals, to make way for redevelopment, said AVA.

Each farm and group will be allotted a space inside a 3ha compound, the size of which will depend on the number of animals. Construction will start next year.

Each unit will be able to house around 20 dogs and will include facilities like food storage and bathing areas.

The rental rate for groups and shelters will be around $13 per sq m per month. Pet farm rentals will be based on tender bids for the units.

4. Tengah is home to several farms

Several farms are based in Tengah, including fish and vegetable farms. Two ornamental fish farms, a food fish farm and a nursery will be affected by the expansion, and SLA on Tuesday gazetted the acquisition of the affected land.

The farms and nursery can continue operating at their current sites until January 2019.

Compensation will be based on the market value of the acquired land on the date of acquisition, according to the Land Acquisition Act.

Going green is a central theme of the new Tengah HDB town, which will have a car-free Town Centre.

All roads in Tengah will have dedicated walking and cycling paths on both sides of the road.

It will also be home to a large 20ha central park, about the size of Ang Mo Kio Town Garden West, with ponds and canals.

Residents will also be able to take part in community gardening and urban farming in their neighbourhoods with new spaces dubbed "community farmways".

6. A depot for upcoming Jurong Region Line will be in Tengah A site in Tengah has been gazetted for the depot for the Jurong Region Line, a new MRT line expected to be ready in 2025, Second Minister for Transport Ng Chee Meng said in June.

The line will connect areas such as the Jurong Innovation District and the Jurong Lake District.

Construction is expected to begin in 2019, and site preparation works for the depot are ongoing.