SINGAPORE - About 80,000 graves and six farms occupying more than 106 hectares of land - about a quarter the size of Clementi town - will make way for the expansion of a military airbase in the north-western part of Singapore.

The expansion of the 78-year-old Tengah Air Base is to accommodate the relocation of Paya Lebar Air Base (PLAB), which will be completed from 2030 onwards. Part of PLAB will also move to Changi Air Base.

In 2013, Defence Minister Ng Eng Hen said in Parliament that the expansion of both bases in Changi and Tengah will be necessary to house relocated fighter and support squadrons as well as accommodate facilities now in PLAB.

To prepare for the expansion in Tengah, the Government is acquiring four private land plots, exhuming 80,500 graves and realigning a major road.

Choa Chu Kang Cemetery, the only active burial ground and the biggest cemetery here, will lose a third of its 318ha land - or 100ha - in the largest exhumation there to date. Newer graves, with the most recent burial taking place three years ago, will have their exhumation date announced later. They include another 30,000 Muslim graves and 500 Chinese graves.

The Government will bear the costs of exhumation, as well as cremation for Chinese graves and reinterment for Muslim ones. Claimants will bear additional costs for performing other rituals or placing the remains in private cemeteries. 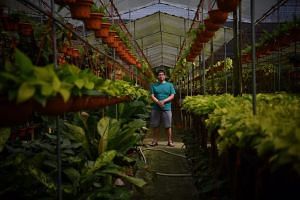 Farmers affected by Tengah Air Base expansion worried about their future

Separately, six farms are also affected. Four plots of private land - affecting three fish farms and a nursery - will be handed over to authorities by Jan 2019, and will be compensated based on market value on the date on acquisition. Their 20-year leases would have otherwise ended between 2027 and 2030.

Two other farms will not have their leases renewed. Orchid farm Williton Orchids' lease expires in 2019. Another affected farm, Chew's Agriculture, had sold its remaining lease to the Government in May last year to purchase a new site.

The total affected farm land area adds up to about 6.3ha.

The affected farms were notified on Tuesday morning (July 18). The farms can continue operations at their current sites until January 2019. 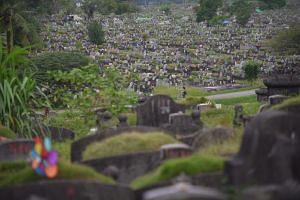 5 things to know about the expansion of Tengah Air Base

Agencies are studying the impact on the road and possible mitigation strategies, including transplanting the trees to a new road. 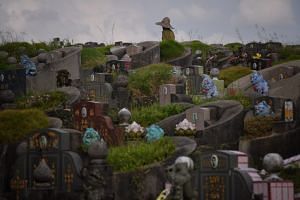 In a joint statement, the Ministry of National Development, National Environment Agency and Singapore Land Authority said the Government had "considered all alternatives" in developing this plan, and taken in account "our national defence and security needs, as well as the overall benefits of moving PLAB in the longer-term".

"Government agencies have, as far as possible, tried to minimise the impact of these works, and affected stakeholders will be given advance notice to make alternative arrangements," they said.

The relocation of Paya Lebar Air Base was first announced by Prime Minister Lee Hsien Loong in his National Day Rally in 2013. 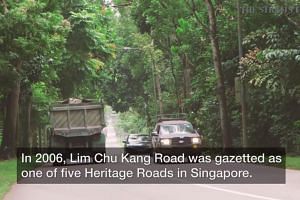 Tengah Air Base expansion: 6 things to know about Tengah area, its forest and animal 'towns'

The move will free up a large 800ha area in Paya Lebar - an area bigger than Bishan or Ang Mo Kio - for new homes, offices, factories and parks, and also remove height restrictions on a large area around Paya Lebar, Mr Lee had said, adding that the full changes will take place 20 to 30 years later.