A town as big as Bishan will be built in Tengah.

Surrounded by greenery, it will be planned as a "Forest Town", National Development Minister Lawrence Wong said in Parliament yesterday.

As he unveiled a map and an artist's impression of Singapore's 24th Housing Board town before MPs, Mr Wong said it will be integrated with nature as well as the nearby Jurong Innovation District.

"This is only one picture, I have seen many more - plans, pictures and visualisations of what our planners are doing," he said.

Plans to develop Tengah, a 700ha site which is bounded by the Kranji and Pan-Island expressways, Brickland Road and Bukit Batok Road, were mooted as early as 1991 in a concept plan for Singapore in the future. 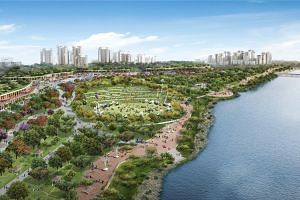 Three HDB estates to get makeovers 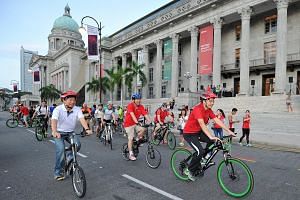 Stepping up car-lite strategy a boost for cyclists, pedestrians 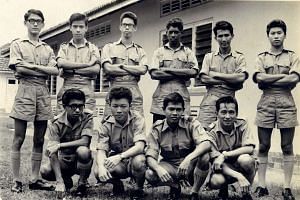 Tales from Tengah: 4 Tengah Air Base veterans recall their days as airmen

Twenty-five years on, the plan now is to integrate a new "industrial park of the future" that Finance Minister Heng Swee Keat unveiled in his Budget statement last month.

The Jurong Innovation District - whose first phase will be ready around 2022 - will bring together researchers, students, innovators and businesses to develop products and services for the future.

"Tengah will be a very exciting place to live, work and play," Mr Wong said in the debate on his ministry's budget yesterday.

When ready, the town bordering Choa Chu Kang, Bukit Batok and Jurong West towns is expected to have about 55,000 homes.

Mr Wong also outlined plans for Singapore's urban development in the next 10 to 20 years.

These include a second central business district at Jurong Lake, a new creative cluster in Punggol and a new waterfront Northern Growth corridor in Woodlands and Sembawang.

Existing HDB towns will continue to be rejuvenated, Senior Minister of State for National Development Desmond Lee said, as he outlined some of the makeovers in store for Toa Payoh, Pasir Ris and Woodlands in the next 10 years.

Woodlands will get a town plaza for community activities and its waterfront will see more greenery and shaded spots.

Mr Wong said that in transforming the city, greater focus needs to be placed on making sure public spaces are well-connected and conducive for walking and cycling.

Developers will be required to incorporate the needs of pedestrians and cyclists upfront in their plans.

Seamless cycling routes between six housing estates and the Central Business District would also be built, while parking charges may be raised to manage the use of cars.

In a bid to further boost home ownership, Mr Wong spelt out details of a scheme to help families in public rental flats buy homes again. Under the Fresh Start Housing Scheme, to start this year, eligible families with school-going children can get grants of up to $35,000 to buy new two-room flats with shorter leases.

Government assistance will also be given to ensure the families get the social support they need, he said.

SEE TOP OF THE NEWS & HOME

A version of this article appeared in the print edition of The Straits Times on April 12, 2016, with the headline 'Tengah to be developed into a 'Forest Town''. Subscribe
Topics:
More
Whatsapp Linkedin FB Messenger Telegram Reddit WeChat Pinterest Print Purchase Article Copy permalink