SINGAPORE - Flying kites and drones are some of the aerial activities that will not be allowed around the Padang during the National Day weekend on Friday (Aug 9) and Saturday.

The Civil Aviation Authority of Singapore (CAAS) said other aerial activities that will be prohibited include the hoisting of captive balloons, which are large tethered balloons that can measure up to 2m or 3m in diameter.

The ban, which takes place from 5.30pm to 8.30pm on both days, covers the Padang and the area surrounding it, including Parliament House, the Marina Bay floating platform and Sentosa Island.

CAAS said the area around the Padang has been established as a temporary restricted area in which certain aerial activities are prohibited to ensure the safety of the public and the aircraft that will be flying at low levels as part of  National Day Parade 2019 (NDP 2019).

The temporary restricted area extends from ground level to 600 feet above the mean sea level.

The area was earlier established under the Air Navigation Order on some days in June, July and August, which included the rehearsals and previews, in the lead-up to NDP 2019.

This Saturday was included in the list as a reserve date. 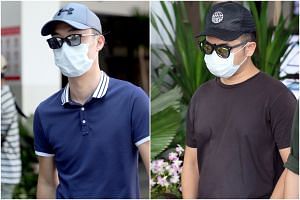 In a first, 2 men charged after allegedly flying drones within 5km of air base without valid permit

According to CAAS, "in the event of poor weather conditions on any of the planned dates, the reserve dates may also be utilised".

The authority said that "unauthorised conduct of aerial activities within and into the temporary restricted area is an offence under the Air Navigation Order" and added that personnel from the Singapore Armed Forces will be deployed to conduct enforcement activities.