SINGAPORE - In a first, two men were taken to court on Friday (July 5) after they allegedly operated drones for recreational purposes within 5km of Paya Lebar Air Base without a valid Class 2 activity permit.

Ed Chen Junyuan, 37 and Tay Miow Seng, 40, were each charged with one count of an offence under the Air Navigation Order.

This is the first prosecution involving the unauthorised operation of a small  unmanned aircraft (UA) in an area close to an aerodrome, the  Civil Aviation Authority of Singapore (CAAS) said in a statement.

On May 28, the Singapore branch of LT Sambo, a construction company, became the first ever to be charged in court under the order.

Chen and Tay are accused of committing the offence at an open field near Block 128C Punggol Field at around 9pm on June 26.

According to court documents, Chen was said to be operating a DBPOWER FPV that weighed 0.357kg, while Tay allegedly used a "Bumblebee wrapped DJI drone" weighing 0.43kg.

The Civil Aviation Authority of Singapore (CAAS) stated on its website that due to Singapore's busy airspace and densely populated urban environment, flying an unmanned aircraft or drone must be carried out "in a safe and responsible manner". 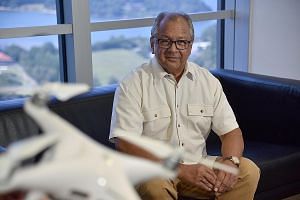 It added that if not carried out properly, flying such devices may pose a risk to aviation and public safety.

CAAS also stated that a Class 2 activity permit is required when using drones for recreational or research purposes under any of these conditions: at operating altitudes higher than 200 ft (about 60m) above mean sea level, within 5km of a civil or military aerodrome, or within any restricted or danger areas.

Chen and Tay are represented by lawyers Josephus Tan and Cory Wong from Invictus Law Corporation.

They will be back in court on Aug 2.

The case involving LT Sambo is still pending. It allegedly operated a small unmanned aircraft outdoors "in the course of business" without a Class 1 activity permit, along Marine Parade Road on Nov 17, 2017.

Court documents did not reveal the details behind the firm's alleged use of the drone, which was identified as a DJI Phantom 4 and weighed 1.3kg.

"CAAS takes a serious view of errant operations of UA which may pose threats to aviation or endanger the safety of others, and will not hesitate to take enforcement action against those who contravene regulations," the authority said in its statement.

"We remind members of the public to operate their UA safely and responsibly, and with the necessary permits. More information about the do’s and don’ts of flying UAs, as well as the permit application requirements and processes for UA operations in Singapore can be found here http://www.caas.gov.sg/flyitsafe."