SINGAPORE - Diversity is a source of strength for societies, and engaging meaningfully with difference is not easy, but it is necessary, President Halimah Yacob said on Wednesday (June 19) in a speech where she outlined three key ingredients for social harmony.

These are accommodation, dialogue and social cohesion, which must be nurtured by individuals rather than just governments, she said.

"Friendships and connections will have to be built, face to face," she said. "Social trust has to be forged, one positive encounter at a time."

"Strength from diversity can only grow from dialogue, give and take, speaking and listening."

The President was speaking at the opening dinner of the inaugural International Conference on Cohesive Societies, a platform she had mooted to discuss ways of forging interfaith understanding and social cohesion.

Around 700 academics, government officials and members of religious and civil society groups from close to 40 countries are attending the conference, which ends on Friday.

The conference is organised by the S. Rajaratnam School of International Studies (RSIS) at the Nanyang Technological University, with the support of the Ministry of Culture, Community and Youth. 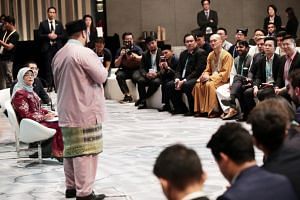 'Everyone has a role': President Halimah meets young leaders to discuss social cohesion

In her speech, Madam Halimah spoke of how each community within a diverse nation contributes to a more interesting and vibrant national life.

"The world would be all the poorer if it had no room for difference. If we were all the same, we would have nothing special to offer, nor anything to learn from others. The more diverse we are, the richer we become."

But she also noted that people instinctively bond with those who are like them, meaning that skin colour, beliefs, customs and other markers of identity can become fault lines of mistrust and conflict.

This is seen in the spread of extremist ideologies or anti-immigrant rhetoric which can take on racial and religious overtones, she said.

"A nation cannot prosper if its people are divided. A society cannot be proud if its people distrust each other," Madam Halimah added.

"Only a cohesive society built upon mutual trust can harness the strength of its diversity, so that its people can build a better future."

RSIS executive deputy chairman, Ambassador Ong Keng Yong, also spoke at the dinner on the importance of interfaith dialogue in the light of terror attacks on mosques in New Zealand and churches in Sri Lanka in recent months.

"We live in a time where conversations surrounding race and religion are often marred by negative emotions such as hatred and fear," he said. "The place of worship has become the target of violence instead of a peaceful sanctuary for believers."

Madam Halimah, in her speech, elaborated on what she believes are the foundations of social harmony in any society.

First, there must be accommodation where space is created for communities to celebrate their own distinctive cultures, even as they accept differences and refrain from imposing their own practices or requirements on others.

Next, dialogue and interaction help foster familiarity and friendships, including informal interaction that "can go a long way to improve relations among diverse groups".

Lastly, social cohesion has to be "cemented by a shared conception of the common good, and a felt reality of collective belonging". Without this, different community groups can instead become pressure groups representing sectional interests, Madam Halimah said.

The President said that forging unity and drawing strength from diversity has always been - and will continue to be - part of the Singapore story.

She rounded up her speech by stressing that social cohesion is not something that can be "commanded or dictated by the government".

"It can only be nurtured and inspired by each of us, and what we do every day."