SINGAPORE - Strengthening inter-cultural understanding was one of the topics when President Halimah Yacob held an informal discussion with young people from around the world on Wednesday (June 19).

President Halimah met some of the 100 delegates who were in Singapore on Tuesday and Wednesday for the Young Leaders' Programme.

It was attended by representatives, aged 20 to 40, from faith-based, community-based, public and corporate organisations.

Participants stressed the importance of making sure that nobody is left out of religious dialogue.

"Everyone has a role," President Halimah agreed. "Finding out who is not in the room or part of the conversation is really important because sometimes we talk to ourselves."

"We may be disseminating information to ourselves and like-minded people but we may not be communicating to others or find out who is not in the room and bring them into the room so that they may also find common goals, platforms."

Participants also brought up concerns of technology being used to spread racist sentiments and hatred.

"We may live in one country but we are very much connected to the whole world. And what we see around the world is not very pleasant," said President Halimah.

"We see rising instances of racism, of discrimination or hatred of all forms. Discriminatory sentiments affect everyone." 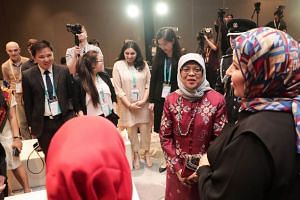 "There is proliferation of extreme views made possible by social media. This aggravates racial and religious misunderstanding, tension, intolerance and confrontation.

"It is critical that we actively resist hatred politics and strive for mutual tolerance, understanding, respect for all races and religions. We must be discerning of messages that propagate hate."

The Young Leaders Programme is part of the International Conference on Cohesive Societies (ICCS), which opened on Wednesday.

The three-day conference, which runs until Friday, is a platform for conversations on strengthening interfaith understanding and developing new ideas to foster greater harmony in societies. It is expected to be attended by around 1,000 delegates from close to 40 countries.

It is organised by the S.Rajaratnam School of International Studies at Nanyang Technological University with the support of the Ministry of Culture, Community and Youth.