SINGAPORE - The first international conference in Singapore on social cohesion and interfaith harmony will take place from June 19 to 21 at the Raffles City Convention Centre, President Halimah Yacob said on Saturday (March 30).

The International Conference on Cohesive Societies will bring together local and international thought leaders across academia, government, religious groups and the civic sector to share their experiences and ideas, collaborate and encourage people to rally their own communities to develop social cohesion, she said.

It will be organised by the S. Rajaratnam School of International Studies and supported by the Ministry of Culture, Community and Youth.

"The purpose of the conference is very clear... to bridge the divide and to ensure that we build a more cohesive society," said Madam Halimah, who was speaking on the sidelines of her visit to the Chinese Development Assistance Council at Tampines.

"It is also to ensure that we strengthen trust among the communities and this is important because we saw what happened in Christchurch, therefore we cannot overemphasise the importance of cohesion and harmony. This is always a work in progress, there will always be new threats...so it is an effort we must constantly invest in."

She urged all Singaporeans to engage and understand other communities and faith cultures.

The conference will include a track for youth leaders in the form of the Young Leaders' Programme, to provide them with a platform to tackle social challenges and find like-minded collaborators. The idea of a holding such a high-level dialogue was mooted by Madam Halimah last year. 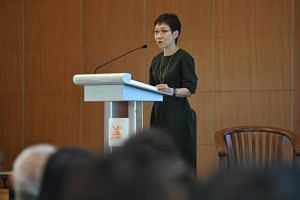 Christchurch shootings show radicalisation could be present in any race or religion: Grace Fu

Madam Halimah also addressed concerns about a survey published on Thursday (March 28) by the Institute of Policy Studies (IPS) in which 15 per cent of 1,800 residents in Singapore said they found Muslims threatening.

Those living in private housing were more likely to think that Muslims were threats, compared with those in Housing Board flats.

"There is so much disinformation and false narratives about Islam spread in the media and online by Islamophobes that these have caused some to fear Muslims," she said.

"I think what IPS needs to do is probably follow up and drill down a lot more as to why there is that apprehension or concern," she added, encouraging people to reach out to the Inter-Religious Organisation if they are uncertain about other faith communities.

Madam Halimah also suggested that private estates could organise their own meetings with other religious communities.

She lauded how communities in New Zealand came together to support one another, after a white supremacist attacked two mosques in Christchurch, killing 50 people and injuring 42.

"The important thing is to invest during times of peace, not to scramble when something happens. We cannot be complacent," Madam Halimah said.

During her visit to the Chinese Development Assistance Council, she spoke with young children from lower income families in the kidsREAD programme, and with volunteers and parents of the Supervised Homework Group Programme.