The Rail Corridor that cuts through the Agri-Food Innovation Park was initially meant for development, but was kept as a "green corridor" by JTC Corporation and the National Parks Board (NParks).

In a media briefing yesterday, a JTC spokesman said the entire 25ha site at Kranji Road and Kranji Close was originally slated for industrial development.

In 2019, JTC planned for 40 per cent of the site to be set aside for green cover as part of the Agri-Food Innovation Park. The green cover includes preserving a stretch of the Rail Corridor to create a green corridor between 75m and 100m wide and spanning 6ha.

"This provides ecological connectivity between Sungei Pang Sua and Sungei Mandai leading to Mandai Mangrove and Mudflat... (and) serves as a focal point that adds character to the estate," the JTC spokesman added.

A linear park will also be developed along Sungei Pang Sua, where NParks will care for natural vegetation and enhance the banks' native plants.

"As Singapore's first eco-district, JTC and NParks are conceptualising a green masterplan that blends nature with a built environment," JTC said.

"This includes creating lush green spaces where existing natural assets will be restored and enhanced to help cool the environment."

When completed, Sungei Kadut Eco-District will also be integrated into the Rail Corridor.

Meanwhile, all works on the Kranji site remain suspended while investigations are ongoing.

When a land parcel is cleared for development, it involves several parties apart from the contractor, a JTC spokesman said yesterday.

As the developer, JTC engages a consultant to execute various roles, including the design and submissions for the authorities' approval. 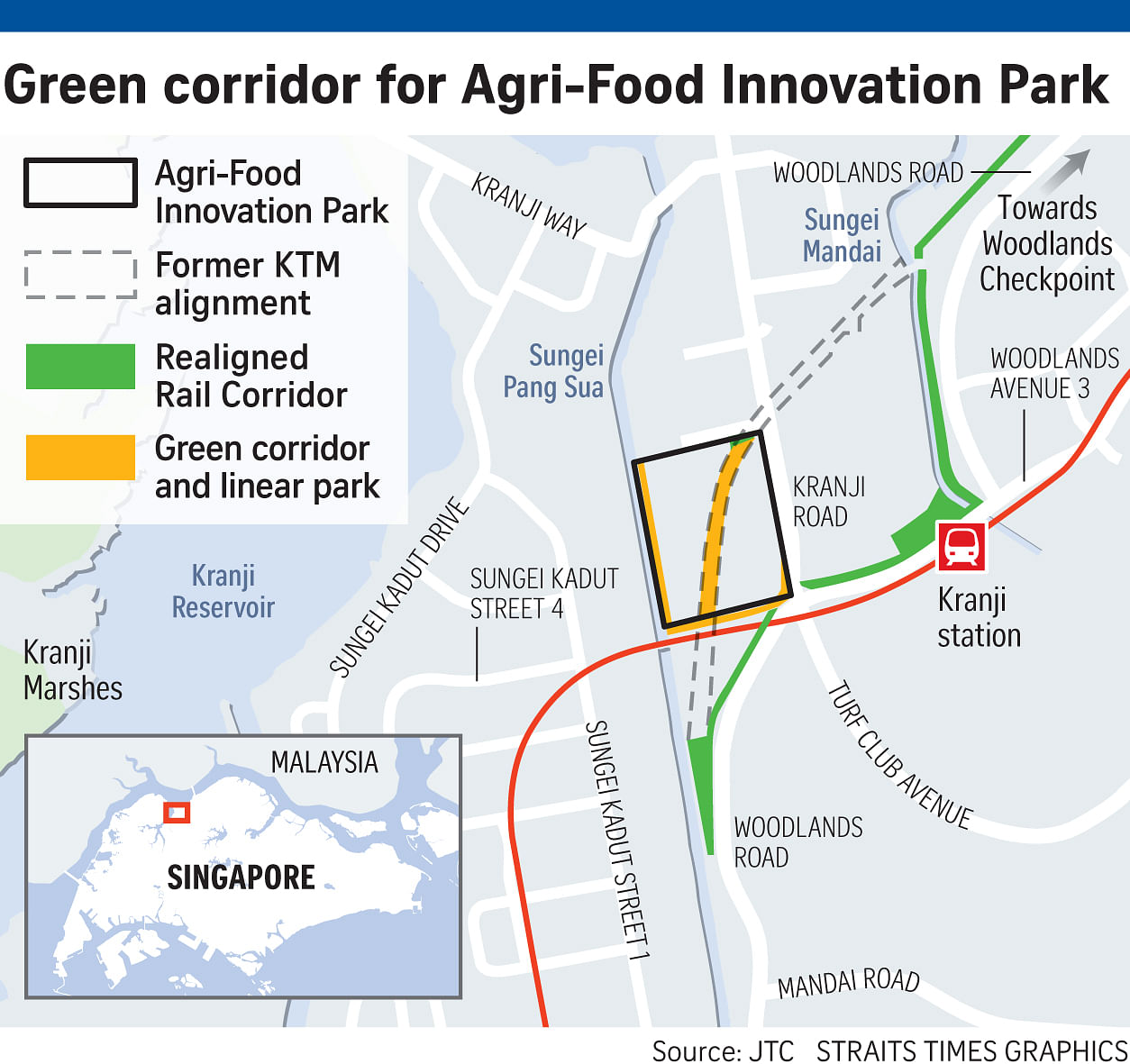 JTC staff will also visit the site and attend progress meetings with the consultant and contractors. They supervise ongoing works, including timeline, quality and safety requirements.

The consultant's role includes acting as a qualified person and superintending officer.

CPG corporation was employed as the consultant for the Kranji woodland site.

The consultant applies for and coordinates the approval for building plans from the different authorities. Upon receiving the approvals, the consultant will relay instructions to the contractor to execute the works.

The relevant authorities review applications for development to ensure that they meet regulatory standards.

For example, development proposals that affect wildlife will need to comply with the Wildlife Act, administered by the National Parks Board (NParks).

Approval is granted only when the proposals have met requirements imposed by regulatory agencies.

Projects close to sensitive nature areas may be required to carry out more detailed environmental studies.

In this case, the site involving Kranji woodland is not a sensitive area. However, further environmental assessments were required because of a new drain in the resubmitted building plan that could pollute Sungei Pang Sua, which leads to the conserved areas of Mandai Mangrove and Mudflat.

A contractor is employed to carry out works such as clearing plots of land. It can do this only if it is authorised to do so by the superintending officer.

The contractor will also have its own project managers to supervise the site. 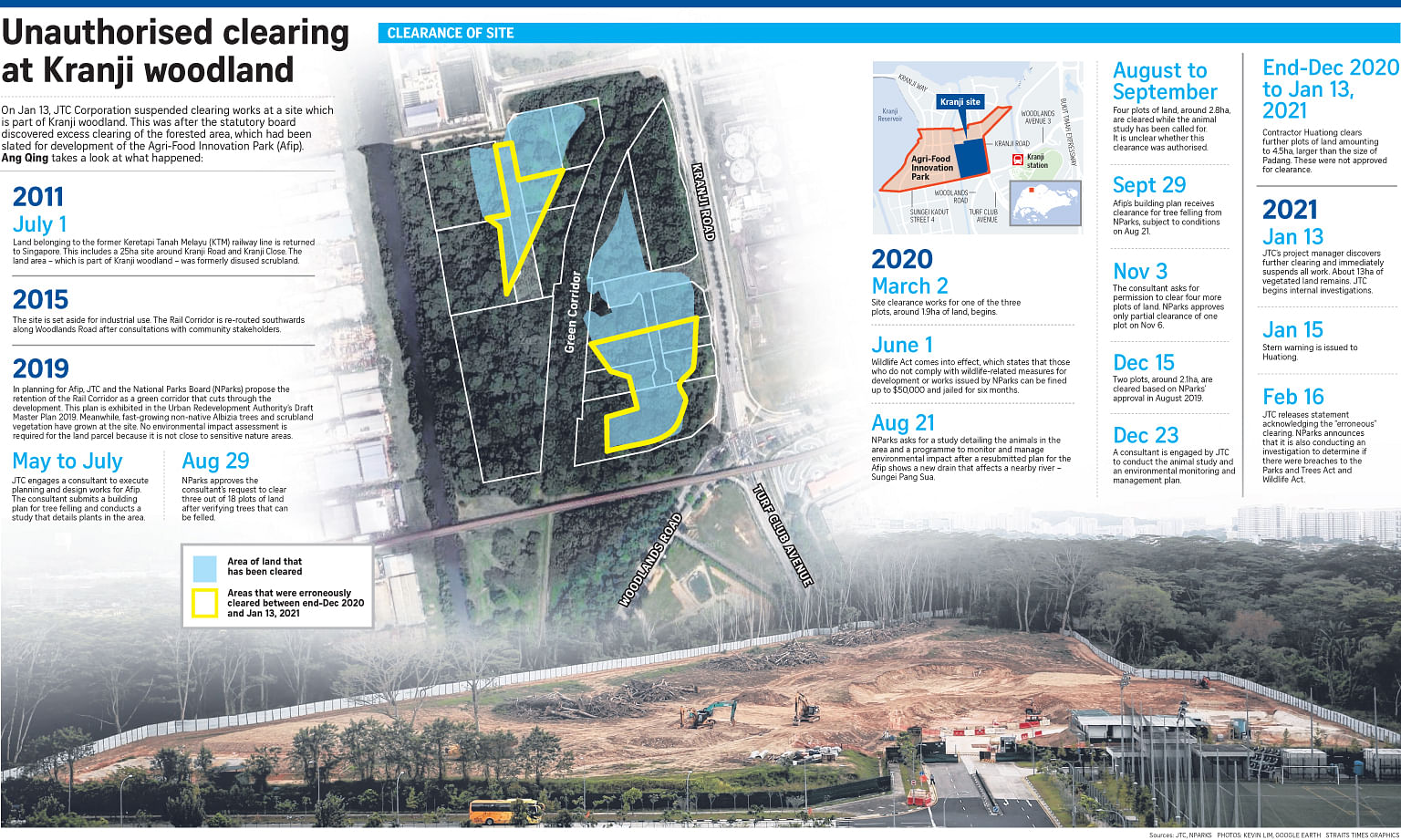