SINGAPORE - Travel agents are gearing up for a strong finish to 2021 after Singapore announced quarantine-free leisure travel arrangements with nine new countries over the past two days, its biggest move to reopen borders so far.

Fully vaccinated travellers can travel to the United States, Britain, Denmark, France, Italy, Spain, the Netherlands and Canada from Oct 19, and to South Korea from Nov 15. This comes on top of existing Vaccinated Travel Lanes (VTLs) with Germany and Brunei. However, the latter has not yet opened its borders to leisure travellers from Singapore.

Those in the travel industry are optimistic about the new destinations, with figures from the Singapore Tourism Board showing that the US, South Korea and Britain were Singapore's eighth, ninth, and 10th largest markets in terms of international visitor arrivals in 2019, prior to the Covid-19 pandemic. The top three markets were China, Indonesia and India.

"This is hands down the best news since the pandemic started. I'm confident that it will give the business a huge uplift in sales and bookings again," said Mr Nicholas Lim, Asia CEO of The Travel Corporation (TTC).

TTC owns 40 travel brands including tour company Trafalgar and Uniworld Boutique River Cruises. Prior to the pandemic, Singapore comprised 50 per cent of its bookings from Asia.

Mr Jeremiah Wong, senior marketing communications manager at Chan Brothers Travel, said the bold move to open up more VTLs will spur the recovery of leisure tourism. Pre-pandemic, tours to Europe made up about 35 per cent of the company's outbound packages.

The announcement is timely for those anticipating a white Christmas, with the year-end period a popular time for people in Singapore to travel.

Ms Alicia Seah, director of public relations and communications at Dynasty Travel, said the company has already received inquiries on tours to Europe from families with fully vaccinated teenage children.

As part of the scheme, people can visit multiple VTL destinations in the same trip, a more enticing prospect.

"Initially, when only Germany was open for leisure travel without quarantine, the response was lukewarm, as people wanted more travel options," Ms Seah said.

Before the pandemic, most customers opted for multi-city packages covering two to three destinations over 12 to 16 days. She believes this will remain the case for trips to Europe.

As for South Korea, the company has received inquiries for longer trips, up from five to eight days on average.

Another boon is the number of Covid-19 polymerase chain reaction (PCR) tests being reduced from four to two, travel firms said. From Oct 19, travellers entering Singapore need to take only a pre-departure test before their return flight, and another test upon arrival. Subsequent tests on day three and seven are no longer necessary.

"We reckon that this will encourage more travellers to take flights for overseas holidays," said Mr Wong. 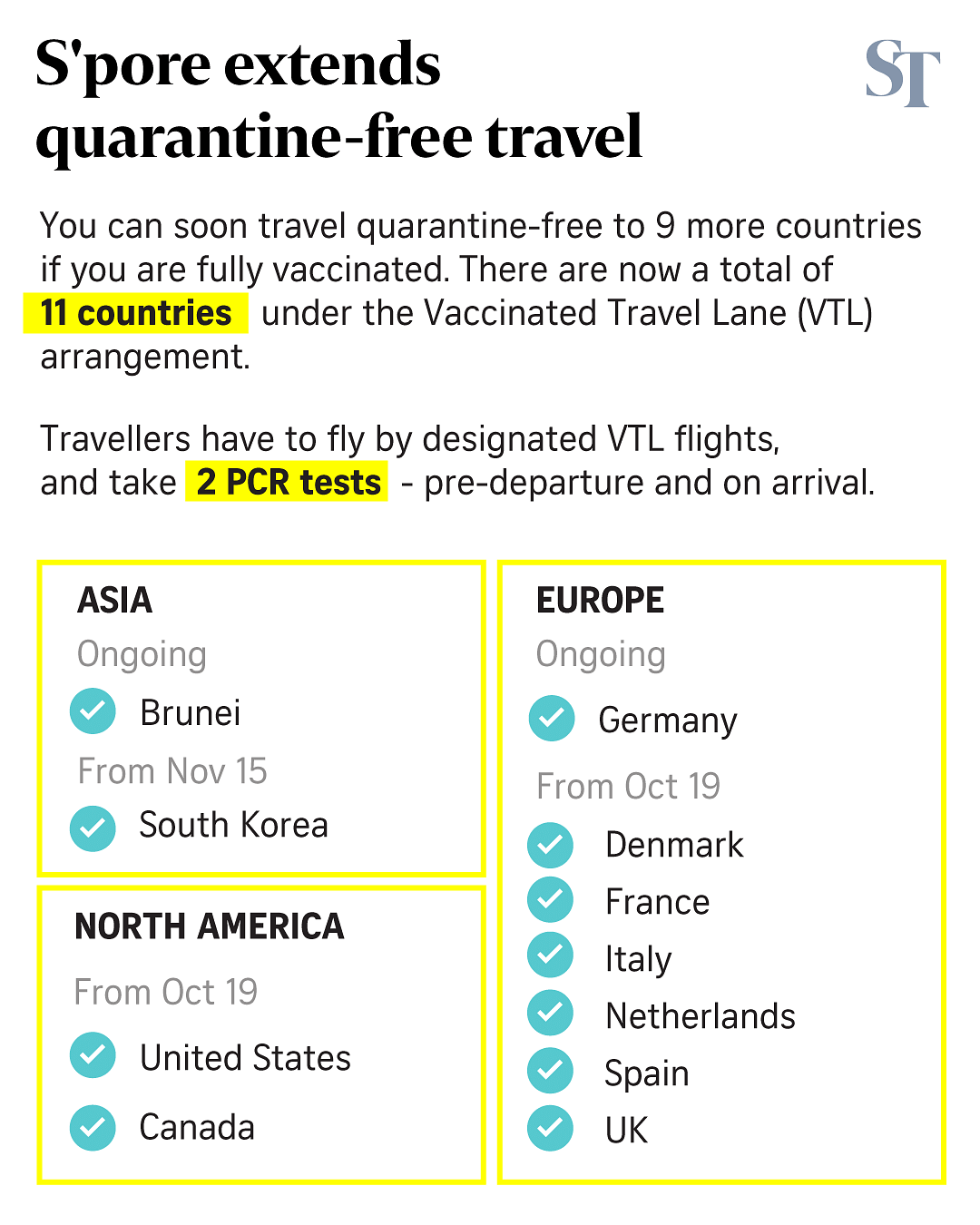 Travellers may have to contend with higher prices across the board, however.

Mr Lim said the prices of some TTC tours have gone up by 5 to 10 per cent since 2019 as overseas suppliers raised prices due to the pandemic.

Packages from Dynasty Travel may cost about 15 to 30 per cent more due to smaller group sizes and the cost of Covid-19 tests, Ms Seah said. The company has reduced its maximum group size from 40 to 20, to give travellers peace of mind.

askST: What do I need to know if I am planning to travel quarantine-free to these 11 countries?

She added that there is a possibility of a spike in flight prices, similar to when the travel bubble with Hong Kong was first announced. Although this did not happen for the VTL with Germany, she said it may occur with South Korea due to the country's proximity.

Even so, travellers are not deterred.

Marketing communications consultant Carolyn Ortega is planning to travel alone to Britain to visit her 19-year-old niece, who is studying modern dance at the Rambert School of Ballet and Contemporary Dance near London.

"Her parents won't be able to visit her because they have two other younger children here. I'll bring along her favourite foods from Singapore, including pineapple tarts," said Ms Ortega, who is in her 40s.

She also intends to go to Spain to dine at Michelin-starred restaurant Baga in the southern city of Jaen, as well as at Los Marinos Jose Restaurante, a restaurant known for its red tuna belly cured in salt, located in the coastal city of Malaga.

Mr Aaron Wong, who runs travel website The MileLion, has booked a trip to South Korea at the end of November and is planning another multi-stop itinerary to include as many of the new VTL countries as possible.

He is looking to spend two to three days at each destination to give readers and would-be travellers a sense of the situation on the ground, including restrictions or procedures in place.

"After 20 months of being cooped up, people in Singapore finally have 10 two-way quarantine-free travel options. While VTL travel is not without its pitfalls, it's something most people wouldn't have dreamed of this time last year," he said.

What are Singaporeans' top picks among Vaccinated Travel Lane destinations? | THE BIG STORY