SINGAPORE - Moves are underway to correct the wide gender imbalance in the executive ranks of unions here.

Women make up almost half the membership of unions affiliated to the National Trades Union Congress (NTUC) yet occupy just 33 per cent of leadership roles in these unions.

A developmental programme is in the works to help prepare more women for positions at the helm.

It aims to address specific issues they face, such as a lack of confidence to lead in traditionally male-dominated environments.

NTUC announced the initiative on Tuesday (March 12) at a forum commemorating International Women's Day that attracted about 300 union leaders.

President Halimah Yacob gave the opening address, noting the importance of female union leaders in a time of technological disruption: "There will be increasing numbers of women PMEs (professionals, managers and executives) in the workforce, and the unions' biggest challenge will be to reach out to them and engage them meaningfully.

"Women trade union leaders have played a critical role alongside their male counterparts in making our workplace a fairer and just place for all workers." 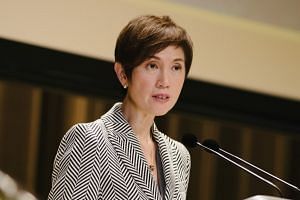 Madam Halimah added that young women interested in leadership positions need role models as well but it can be difficult for them to take on such jobs given challenges like the need to balance work with expectations to care for their families.

Apart from encouraging employees to adopt telecommuting and other flexible work arrangements, Madam Halimah said: "It is also important for families to better share the caregiving responsibilities at home, as government responses and employers' initiatives alone will not solve the problem.

"This is obviously a global challenge, as the International Labour Organisation recently pointed out that progress towards gender parity at work has barely nudged for the past quarter century, and will speed up only when men take up more caregiving tasks."

Other challenges include ensuring a steady pipeline of young women unionists to take on leadership roles, with the need for more to serve at different levels - in companies, union headquarters and the NTUC's central committee.

But some progress has been made over the years, said Madam Halimah. Although women are still found mainly in traditional sectors such as nursing and teaching, more are entering the fields of science and technology as well.

NTUC secretary-general Ng Chee Meng also noted at the event, held in the NTUC Centre, that union leaders have helped to secure more support for women over the years, such as better childcare facilities for working mothers and help for those who want to return to the workforce after leaving temporarily.

He cited how NTUC Childcare moved from providing mostly custodial services in the late 1970s to early 1980s to now including education.

Women have a key role to play in this process as well. The NTUC Women's Programme, he added, helped them re-enter the workforce via training, skills upgrading and the push for jobs closer to home.

But more remains to be done, with NTUC having had only two female presidents of its central committee, Mr Ng said.

It is "not bad" that there have been two in recent years compared with none in the past, he said, adding: "We can't change history, but in the way forward, with enough women stepping forward to assume these roles, I'm sure we will have better representation in the next 50 years.

"Today, our country faces a much tighter labour force and with the limited growth in manpower, every worker matters... (women who are working) therefore matter even more."

With more women in the workforce, labour participation rates will rise and this will be a boost to the economy, Mr Ng added.

"It is not only important for us to look back to see what are the lessons learnt, but importantly for the labour movement, how can we charge the way forward to make sure that women will have equal opportunities... career development possibilities in our workforce in Singapore," he noted.

"That, I think, must be something that the 4G (fourth generation) leaders will continue to do.

"I want younger kids that may be in the industries now to not have the same lens I had when I was a young boy - seeing women in lower-paying jobs and men as managers or chief executives."