Greater flexibility in work arrangements was a key theme at a dialogue between women's groups and Minister in the Prime Minister's Office, Ms Indranee Rajah, last night.

Ms K. Thanaletchimi, honorary general secretary of the Singapore Council of Women's Organisations (SCWO) and president of NTUC Women and Family Unit, for instance, suggested that the Government could educate and encourage employers, especially small and medium-sized enterprises, "so that women don't have to retreat from the workplace when they need to care for their families".

The two-hour dialogue at the SCWO headquarters in Waterloo Street was organised for female leaders and women's groups to engage with the Government.

Dr June Goh, president of the SCWO, suggested that employers could convert childcare leave entitlements to additional parent-care leave, especially for older women whose children are grown up.

Ms Corinna Lim, executive director of the Association of Women for Action and Research, noted that caring for elderly parents is a growing concern.

She said: "Women whose parents become aged often find they have to give up their jobs and bear the costs of their parents' care out of pocket... We do not want to see these women age into poverty."

Ms Indranee agreed that flexible arrangements could be beneficial not just for working women but also for their employers. 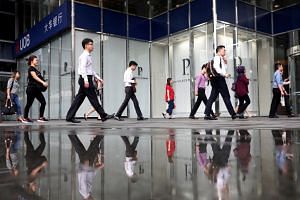 Growing number of women in the workforce

She said: "We should encourage employers to be more family friendly, while balancing their concerns about productivity. But when employers are willing to be flexible, employees are often more than willing to give back."

Ms Carrie Tan, executive director of women's charity group Daughters of Tomorrow, highlighted that women who work irregular hours face difficulty in getting their children to and from childcare centres.

She said that the charity group had started a peer-to-peer child-minding programme, in which women link up to help mind each other's children when needed.

Other topics raised during the dialogue included the higher premiums paid by women, compared with men, for the CareShield Life insurance plan, and the lack of legal avenues for women who wish to freeze their eggs in Singapore.