But this can only be accomplished with an understanding of Singapore's context, where people are less likely to volunteer for political office, she said.

"If you watch American Idol, everyone says they will be the next American Idol. That's not quite how we do it in Singapore," Mrs Teo said.

"In our society, it tends to be that people are invited to be part of the political process, and people don't quite put themselves out there... If our men are not likely to put themselves forward, then our women are even less likely to do so."

She added that a "concerted effort" has to be made to notice the women who are doing well in different areas of society, and ask them to consider joining the political arena.

Mrs Teo, who chairs the People's Action Party (PAP) Women's Wing, was speaking on the sidelines of the group's International Women's Day celebrations. The event was held at the party's headquarters along New Upper Changi Road.

Several other political officer-holders were present, including National Development Minister Lawrence Wong and Minister for Culture, Community and Youth Grace Fu. Ms Fu was the immediate past chairman of the PAP Women's Wing, and is presently Organising Secretary of the group's central executive committee. 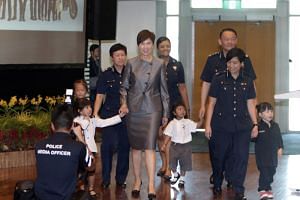 Manpower Minister Josephine Teo: I found courage to enter public life because of my mum

At the event, Mr Wong led a closed-door dialogue session on this year's Budget and how women can benefit from it.

Addressing her audience of some 250 women activists, Mrs Teo said that three values - openness, multiculturalism and a belief in self-determination - have defined the nation's journey "from Singapore to Singaporeans".

Many women embody these values, which make up the "unique DNA of Singaporeans", she added.

"We are natural transmitters of the values that have defined our journey from Singapore to Singaporeans," Mrs Teo said. "And we have a duty to pass these values on, so that future generations will know what it is that makes us tick, and what it is that will keep Singapore going."

For instance, women embrace openness and multiculturalism, breaking down barriers and building bridges in their families, communities and workplaces, she said.

"But what inspires me most is the determination that we often see in women. Adversity is not our enemy."