SINGAPORE - Ikea Singapore said it will not recall chests of drawers linked to the deaths of six children in North America.

The Swedish furniture giant on Tuesday (June 28) announced a massive recall of 36 million chests and dressers, including its popular Malm model, in the United States and Canada, after the US Consumer Product Safety Commission said the children - all aged three years and younger - were killed when an Ikea chest or dresser fell on them.

In response to queries from The Straits Times on Wednesday (June 29), an Ikea Singapore spokesman assured the public that its chests of drawers are safe when anchored to the wall. 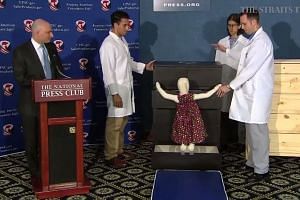 Customers should follow the assembly instructions and use the anti-toppling device provided with the product, the spokesman said.

Ikea Singapore added that the recall by its US and Canada counterparts was based on a local voluntary and non-mandatory standard, which applies to free-standing clothing storage units in North America.

"Ikea Singapore follows this global European standard (one of two global safety standards that Singapore authorities require furniture retailers to comply to), and hence, we will not be conducting any recalls here as we are in compliance with safety regulations."

According to the spokesman, there was one case in Singapore of a chest of drawers that tipped over partially more than 10 years ago.

It resulted in minor scratches for the user, who did not require medical attention. No other cases have been reported since.

Ikea Singapore added that since last year, videos and store communications reminding customers to secure cabinets to the wall have been shown in all Ikea showrooms.

These include warnings that heavy objects should not be placed at the top of a chest of drawers, and to never allow children to climb or hang on them.

Secure It! Creating Safer Homes Together

An advisory on Ikea Singapore's website also contains a guide that provides useful information on which anchoring devices are suitable for different wall materials.

The US and Canada recalls are for several types of chests and dressers, which are taller than 60cm for the children versions and taller than 75cm for the adult versions.

The recalled units were sold at various times through June 2016.

Ikea US said customers are given a choice of two options - a free wall-anchoring repairing kit or a full or partial refund.

Ikea Singapore said if customers need a replacement restraint kit to secure their Ikea furniture in their homes, they can e-mail Ikea Customer Relations at customerservice.ikeasg@ikano.asia or call 6786-6868 to order one for free.

A check by The Straits Times showed that Ikea Singapore has issued six product recalls so far this year. Read more below: