SINGAPORE - By next year, more than half of primary schools and over 90 per cent of secondary schools would have removed mid-year examinations for some levels - a year ahead of schedule.

Education Minister Ong Ye Kung gave this update on Tuesday (May 28) at a biennial conference for teachers, where he shared the progress schools have made in implementing recent policy changes.

The Ministry of Education (MOE) announced in September last year that mid-year examinations for Primary 3 and 5 as well as Secondary 1 and 3 students would be scrapped by 2021, to move away from the narrow focus on grades and help students discover the joy of learning.

On Tuesday, Mr Ong said that while MOE had laid out a schedule for schools to fully implement the changes, many schools have plans to run ahead.

In fact, some primary school principals have already made the changes this year - two years ahead of schedule - and other schools are also removing mid-year examinations at other levels, he added.

Sec 1 students no longer have a mid-year exam starting this year. 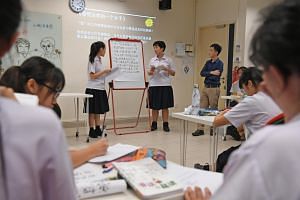 “So what we are seeing is that the mentality of competing for even higher scores in even more tests and examinations is giving way to a new movement to take a balanced approach in teaching and assessments, and bring about greater joy of learning,” said Mr Ong.

In another major step to reduce the overemphasis on academic abilities, the MOE also announced in March that it would abolish the Normal (Technical), Normal (Academic) and Express streams.

In their place will be  subject-based banding, in which students take subjects at a higher or lower level, depending on their strengths.

This new system, the ministry had said, would be implemented in about 25 schools next year, and rolled out to all secondary schools by 2024.

But Mr Ong said that several more schools have asked to be included in next year’s pilot. “We will settle at just below 30 schools, to make sure MOE can give the pilot schools proper and adequate support to make sure that the pilot programme succeeds.”

Addressing more than 1,700 teachers at the event at Singapore Expo Hall, Mr Ong thanked them for their support.

Changes to school assessment: What you need to know

“Any major change will succeed to the extent that it is being supported in the compounds of our schools,” he said.

He added that the MOE will give out more details in the coming months about the transition from T-scores in the Primary School Leaving Examination to broader scoring bands called achievement levels, a change that will take place from 2021, affecting this year’s Primary 4 pupils.

The ministry will prepare information packages for principals and teachers to explain the changes to parents and students, he said.