SINGAPORE - A trailer driver that hit and killed two cyclists along West Coast Highway last year could have dozed off briefly before the fatal crash, said Coroner Marvin Bay on Friday (Oct 20).

In an inquiry into the deaths of Mr Ong Zi Quan, 19 and Mr Ang Yee Fong, 26, the coroner noted that on Oct 27, 2016, the driver, Mr Sahadevan Senguttuvan, had started work at 7.20am, and continued driving - with short breaks in between - before the accident occurred at around midnight the same day.

Coroner Bay, who recorded the duo's deaths as tragic traffic misadventures, said: "He had only taken short meal breaks of 15 to 30 minutes, and claimed to have had one-hour rest in the evening, and then worked steadily until the time of his fateful final trip.

"It was entirely plausible that fatigue and poor rest played a major role in this case."

On Thursday, the now 35-year-old Indian national had testified in court that he was not sleepy despite his long working hours.

In response to this, Coroner Bay said on Friday: "He had been working the same gruelling schedule the day before. Mr Sahadevan's claims to not be sleepy or fatigued at the time of the event are highly suspect.

"The monotonous nature of his activity of prolonged driving and his expected fatigue may well have taken a toll on his alertness and eventually, even his ability to maintain a wakeful state."

Mr Ong and Mr Ang were riding along the road on their power-assisted bicycles with their friend, Mr Marcus Loke Teck Soon, now 18, when the accident took place.

Mr Loke, who was the sole survivor of the incident, testified on Thursday that the trio were on their way to his grandmother's Telok Blangah home at that time.

He said they were cycling in a single file on the extreme left lane along the West Coast Highway towards the Keppel Distripark when the trailer hit them.

But Mr Sahadevan gave a different account on Thursday and said the trio were chatting while sitting abreast on their stationary bicycles on the road, occupying the entire lane. 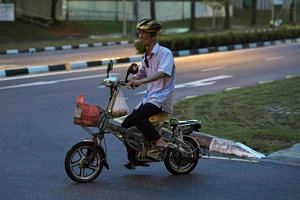 Coroner advises e-bikers to ride defensively, truckers to be alert

On Friday, Coroner Bay said Mr Loke's account was similar to the one given by an independent eyewitness, Mr Supramaniam Thangamani, 56.

He added that the two men's versions of events were also "far more congruent" with video footage of the incident taken from cameras in the vicinity.

The coroner said: "I accept, therefore, that the most likely scenario is that... Mr Sahadevan had been driving his trailer on the extreme left lane of the four-lane thoroughfare when he completely failed to notice Mr Ang, Mr Ong and Mr Loke, who were cycling ahead of him.

"Mr Sahadevan's account of seeing the three riders lined abreast and stationary on the left lane, then cutting into his lane as he shifted right from the extreme left lane is highly dubious, and very likely untrue, going against the grain of the testimonial evidence of Mr Loke, and Mr Supramaniam as well as the scene and CCTV evidence."

It was not mentioned in court whether further action will be taken against the driver.

Following the crash, paramedics pronounced Mr Ang dead at the scene while Mr Ong died in hospital at around 1am the next day.

Coroner Bay said that since 2014, there have been no fewer than 13 fatalities involving power-assisted bicycles.

Highlighting some preventive measures that such cyclists can take to ride safely, he said: "Riders can ensure a safe riding experience by adopting sound personal practices such as wearing a helmet and installing bike lights to see their way at night.

"They should also make sure that others see them, by wearing bright clothing with reflective material to ensure visibility to others, and employing bike mirrors to see what is happening behind them."