He had felt it was too dangerous but Ang Yee Fong , who died in Thursday's accident, 'said nothing would happen'

Every Thursday, Madam Chan Mei Ling, 51, would buy roti prata for her only son Ang Yee Fong. It was one of his favourite dishes and the 25-year-old always promised to finish it when he came home at night.

But on Thursday, he never made it home. Mr Ang was one of two electric bicycle riders killed in an accident with a trailer truck along West Coast Highway.

His wake was held yesterday evening at Sin Ming Drive, where 30 or so relatives and friends showed up, many of them in tears.

Friends described "Boi Boi", as he was affectionately called, as an amiable and loyal young man who would always go out of his way to help his friends. They spoke about Mr Ang's love for lion dance and cycling.

"We would cycle at night because it's cooler and there are not so many cars," he said. "We don't usually wear helmets as it's uncomfortable and we feel safer when there are fewer cars." 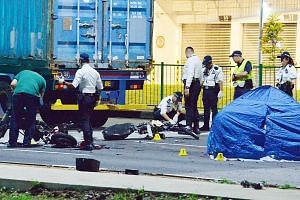 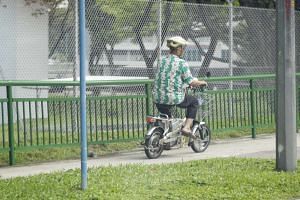 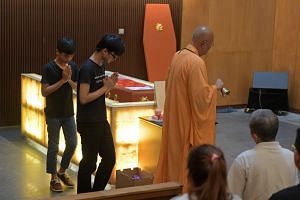 Mr Lee said he and Mr Ang had modified their e-bikes at a bicycle shop. "His bike could go up to 60kmh but he usually went at just 20 to 30kmh to save the battery. We would keep to the side of the road, on the double yellow lines."

Mr Lee said he sold his two e- bikes earlier this year after two of his friends injured themselves. "I told (Mr Ang) to stop riding too because it's dangerous, but he said nothing would happen."

According to friends, Mr Ang and his friends, Mr Ong Zi Quan, 18, and Marcus Loke, 17, were cycling in the West Coast area on Thursday because Marcus, the only one of the three to survive, had wanted to visit his grandmother, who lives in Telok Blangah.

"If we had any trouble, Boi Boi would always help us. How I wish I could pull him out and make him come back to life," said Mr Choo, who added that Mr Ang was working as a waiter before he died.

Mr Ang's maternal uncle, salesman Wilson Chan, 46, said his nephew's love for cycling may have started when he helped out at a bicycle shop many years ago.

"He loved to repair bicycles," said Mr Chan. "He would often get into trouble, but his parents still loved him. He never lied to me... He's a very good guy."

Madam Chan's anguish was palpable yesterday, as she wailed loudly upon seeing her son's body.

"Does your head hurt? You used to protect me, you wouldn't let anyone bully me," she said in Mandarin as she looked into his coffin.

"I must have done something wrong in my previous life, so now I don't have a son to send me off when I die."

Mr Ang's father, his only sibling - an older sister - and girlfriend of three years were also at the wake.

Mr Ong was cremated at Mandai Crematorium in the afternoon.

His sister, who declined to give her name, told The Straits Times her brother, who graduated from ITE earlier this year, was due to start his national service next Monday. "I can't believe this has happened."

Mr Ong, who was the second of four children, also had two younger brothers aged 13 and 16. Their mother, who was visibly emotional at the mortuary, had brought them up after their father died four years ago.

When The Straits Times visited Marcus at the hospital, his mother said her son was too distraught to talk after losing his two friends.