A trailer driver involved in a crash that killed two men on power-assisted bicycles last year told the court yesterday that he had been working for more than 12 hours before the accident.

On the first day of an inquiry into the deaths of Mr Ong Zi Quan, 19, and Mr Ang Yee Fong, 26, the court heard that the driver, Mr Sahadevan Senguttuvan, started work at 7.20am on Oct 27 last year.

The 34-year-old Indian national testified that while working, he had three meal breaks, each lasting up to 30 minutes. He told Coroner Marvin Bay that he had a break from 9pm to 10pm before going behind the wheel again.

Mr Sahadevan was driving towards Keppel Distripark along West Coast Highway when he hit the two cyclists shortly before midnight that day. When State Counsel Bhajanvir Singh asked if he was feeling tired at that time, he replied: "I was not sleepy as I had rested earlier. It was sufficient rest for me."

Mr Marcus Loke Teck Soon, who also testified in court yesterday, said Mr Ong and Mr Ang were his close friends. Mr Loke, now 18, said he was riding with them on his own power-assisted bicycle from Jurong West. They were on their way to his grandmother's Telok Blangah home when the trailer hit them.

The teenager said all three of them were riding on the road in a single file on the extreme left lane, between the two parallel yellow lines. He was riding in front, with Mr Ong about 2m behind him. Mr Ang was cycling about 5m behind Mr Ong, and Mr Loke said both his friends had their rear lights on. 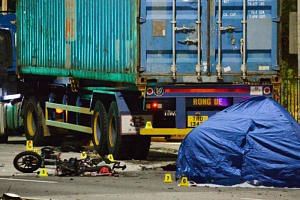 He testified that while cycling, he looked behind and noticed that Mr Ang was missing. Instead, he saw Mr Sahadevan's trailer travelling towards them.

Mr Loke said: "I didn't hear anything. I told Zi Quan to go faster but before he could... the trailer hit him. (The trailer) hit my bike but it (did not) hit me. I flew off my bike."

He added that he landed on a "pedestrian area" beside the road.

Mr Sahadevan had a different account of events and told Coroner Bay that he was driving along West Coast Highway when he suddenly spotted the trio. He said they were stationary and beside one another, blocking the left-most lane. He could not recall if the bicycles were equipped with lights.

He also testified that he was not sure when the impact took place.

When asked if he could have applied the emergency brakes, he replied: "At that moment, I panicked. I didn't know what to do."

Paramedics pronounced Mr Ang dead at the scene while Mr Ong died in hospital at around 1am the next day. Coroner Bay will give his findings today.