Patients can now tap house-call doctor app Speedoc for on-demand private ambulance services in non-emergency cases, much like how one would call a private-hire car.

This ambulance-booking service - the first in Singapore - is a partnership between Speedoc and private ambulance operator Comfort Ambulance and Services.

It was introduced last week and officially launched yesterday.

The service comes in the wake of the Singapore Civil Defence Force's (SCDF) decision to stop taking non-emergency cases to hospitals since April 1, so that resources are freed up for life-threatening cases.

The new service, which is available round the clock, has received about 10 calls since its introduction.

In comparison, the booking fees for a private ambulance are between $50 and $130. 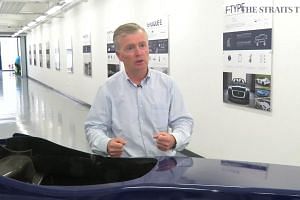 It's basic courtesy to give way to emergency vehicles

Speedoc chief executive Shravan Verma said: "Users will be informed of the charges before they confirm their bookings."

A major feature of the app, highlighted by Speedoc, is the shorter waiting time for an ambulance.

In non-emergency cases, people can call 1777 for a private ambulance, but the waiting time can be as long as two hours, Speedoc said.

"Situations such as pneumonia and serious skin infections are not life-threatening, but patients may need to be sent to a hospital as soon as possible for treatment," it added.

"Other patients may be bedridden, requiring them to be transported in a stretcher."

With the app, the waiting time can be as short as 30 minutes.

With the new service, Comfort Ambulance's fleet of 25 ambulances will ferry people to the more than 100 healthcare institutions islandwide, including hospitals, nursing homes and hospices.

The company is in talks with other private ambulance providers to expand its on-demand fleet, a move it hopes will reduce prices and further shorten waiting times. There are more than 20 private ambulance operators in Singapore.

Users such as Mrs Nidhi Swarup say the service gives them peace of mind and the app is convenient to use.

The 51-year-old founder of the Crohn's and Colitis Society of Singapore, a patient support group, has used it twice: Once, when her 94-year-old father-in-law fell and broke a rib, and the second time, when he was unwell.

Both times, the ambulance arrived in 20 minutes and each trip cost less than $150, she said.

Mrs Swarup said details such as patient information, home address and payment services are already keyed into the Speedoc app.

"When you're panicking, having this service at your fingertips makes life much easier," she added.

A version of this article appeared in the print edition of The Straits Times on July 11, 2019, with the headline 'Call a private ambulance with the tap of an app'. Subscribe
Topics:
More
Whatsapp Linkedin FB Messenger Telegram Reddit WeChat Pinterest Print Purchase Article Copy permalink