SINGAPORE - The full-time national serviceman who died on Monday (April 30) after being warded for heatstroke was a respectful boy who always tried his best at any task he was given, including those in the army.

Madam Jasmine Yeo, whose son Dave Lee Han Xuan received a posthumous promotion from Private to Corporal (First Class), told media on Wednesday (May 2) that he enjoyed his training as a Guardsman from the 1st Battalion Singapore Guards.

"He tried his best to do it. We were also very happy for his enlistment. I think he was doing his best in whatever task he was given. I'm proud of him," said Madam Jasmine Yeo, who declined to give her age.

In the same vein, the family also made the decision last Friday to donate Corporal Lee's organs, but only his corneas could be donated, said Madam Yeo at his wake at their Jurong East home.

"We really want him to contribute his best in his last moments... We really wish that the person who has received it will continue to see the world with Dave," she said, adding that she and her husband, property agent Dennis Lee, were proud of their son's last contribution.

Madam Yeo also shared that the family was close, adding that a memorable thing about Corporal Lee were the hugs and kisses they had whenever he came back from or returned to the army camp.

"(Another thing) is the way we held hands when we went shopping. These are things we will never forget," she added. 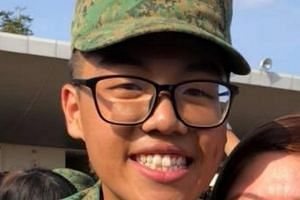 Military funeral for NSF who died after heatstroke

Full-time national serviceman, 19, dies after being warded for heatstroke

Death of NSF after heatstroke: Committee of Inquiry and police to probe incident

Madam Yeo said Corporal Lee, who died almost two weeks after being warded on April 18, had shared that he was happy in the army and had a lot of good friends in his platoon.

However, she declined to comment on his relationship with his commanders.

Earlier on Tuesday, a Facebook user claiming to be from Corporal Lee's battalion published a post detailing what had happened the night before, as well as during and after the march that preceded Corporal Lee's collapse.

The post had alleged misconduct by commanders in charge of the battalion.

After that, a woman who said she was Corporal Lee's aunt shared the post and asked for clarity from the Singapore Armed Forces (SAF).

When asked about the account detailing the events that preceded Corporal Lee's death, Madam Yeo said: "Let's leave it for now, it's too early for us to comment on that... My first priority is to settle my son first. They (SAF) are already conducting investigations."

Corporal Lee will be cremated on Saturday.

He will be accorded a military funeral, said Brigadier-General Siew Kum Wong, Chief of Staff (General Staff) of the SAF, in a statement on Tuesday evening.

Madam Yeo added that the family has received support from the Ministry of Defence (Mindef) and had taken up their suggestion to accord her son a military funeral.

However, when asked if she felt the support was enough, she said: "What is enough when the boy is not making his way home?"

On the day of the incident, Corporal Lee was admitted to Changi General Hospital, almost an hour after first showing signs of distress, where he was warded in the intensive care unit. He fell into a coma and his condition worsened, said Mindef in an earlier statement on Monday.

He died at 5.32pm on Monday, almost two weeks after he was warded. Corporal Lee enlisted on Jan 5 and completed his Basic Military Training on March 11.

In the statement on Tuesday, BG Siew also said Corporal Lee will be awarded the Guards and Recon military tabs, as well as the Guards beret he had been training for.

BG Siew also reiterated that an independent Committee of Inquiry, chaired by a senior civil servant from outside Mindef or the SAF, will investigate Corporal Lee's death.

The committee has full powers and access to both information and personnel to investigate what led to the death, find out the contributing factors, and make recommendations to correct any lapses or inadequacies uncovered.

"Should there be training safety violations, the personnel responsible will be held accountable," said BG Siew.