SINGAPORE - A crocodile has been caught by the authorities at Lower Seletar Reservoir in the early hours of Saturday (Feb 23).

In a Facebook post, national water agency PUB said that it trapped the reptile at about 3am with the help of the National Parks Board (NParks).

"As an added precaution for public safety, both agencies will continue patrolling activities in Lower Seletar Reservoir next week to ensure no further crocodile sightings," it said.

The crocodile is an Estuarine crocodile, PUB said, adding that it is about 1.7m long.

It has been released into the wild.

According to information on NParks' website, the species, also known as the saltwater crocodile, is one of the largest in the world and can grow to more than 5m.

Such crocodiles inhabit brackish and freshwater areas such as coastal areas and wetlands, and are difficult to see because they are often submerged in water. 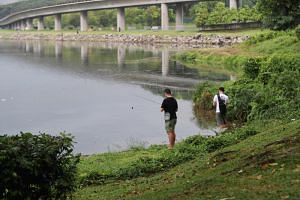 They hunt mainly at night, feeding mostly on fish but they may also eat mammals, birds and carrion.

PUB said that officers from both agencies had been conducting daily patrols and night surveillance after a crocodile was sighted in the same reservoir on Feb 14.

In a separate Facebook post the same day, Second Minister for National Development Desmond Lee said that members of the nature community, including volunteers from the Otter Working Group, also joined in.

The traps were monitored regularly to ensure that no other animal was trapped in them, he added, thanking those involved in catching the crocodile.

The Straits Times had earlier reported on the Feb 14 sighting, noting that water and fishing activities had been suspended and that the PUB was hunting the reptile.

It is not known if the crocodile caught on Saturday is the same one spotted earlier this month.

In Saturday's post, PUB said the reservoir will remain closed, with all water and fishing activities still suspended until further notice.

PUB has advised park visitors not to approach, provoke or feed the reptile but to stay calm and back away slowly if they encounter it and to call PUB on 9632-3261.