SINGAPORE - In the fight against fake news, mainstream news organisations and alternative media platforms should abide by the same professional standards of journalism, while journalists of all stripes should update their fact-checking skills and be trained to provide accurate news.

These recommendations are part of a swathe of countermeasures against fake news the Select Committee on Deliberate Online Falsehoods released on Thursday (Sept 20).

Professional journalism standards, said the committee, include ensuring there is fairness, factual accuracy and intellectual integrity in reporting, and these standards should apply to both mainstream news outlets and alternate media sites which only operate online.

Said the report: "They should be free to air views in a responsible way, which encourages considered discussion and critical thinking."

To ramp up the training of journalists, the committee urged news organisations, technology companies and institutes of higher learning to consider ways to provide such learning opportunities, such as courses and workshops.

Such training should include techniques for ensuring accuracy in a new and rapidly-evolving digital news environment, it added.

Journalists, on their part, need to "proactively find ways to update their skills in digital fact-checking and arm themselves with knowledge of how online falsehoods and disinformation campaigns work", the report said.

Some who gave their views to the panel, like Professor Kalina Bontcheva from the computer science department in Sheffield University in England , said the mainstream media had sometimes published blatant lies. 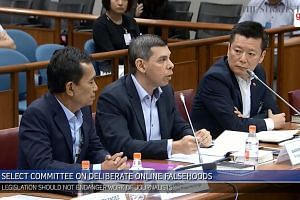 Legislation against online falsehoods should not be so broad that it endangers the work of journalists, says SPH

All have part to play in fighting fake news

Others stressed the importance of maintaining a trusted mainstream media. This is because accurate journalism provides an option for news seekers who might otherwise turn to websites peddling false news or other questionable online platforms.

Said the report: "The Committee is of the view that quality journalism is an important public good which needs to be continually supported and nurtured.

"Quality journalism is a pillar of a society's information ecosystem. It ensures effective communication between the Government and the people, and between different segments of society. It also helps the public understand the world around them."

It cited the 2018 Edelman Trust Barometer, which found that there is greater trust in mainstream media sources for general news and information than in news from various online and social media platforms.

Recognising a need for greater communication between the Government and news platforms committed to quality journalism, including alternative media, the committee said such communication would help build a relationship of trust that is committed to the pursuit of truth.

But it also acknowledges the greater commercial challenges faced by news organisations in the current era of digital disruption.

Said the committee: "News organisations will have to actively reinvent themselves to meet the demands of their readers - both in terms of the speed and interface which news are expected to be presented today, and also the quality and accuracy of the content itself."