It has been a long wait for customers who pre-ordered the Rotimatic two years ago, but some are saying it has been worthwhile.

The machine has been hard at work in some households, churning out chapati, and users tell The Sunday Times that it saves them the laborious work of kneading and cooking the Indian flat bread.

Ms Tanaz Suresh, 45, who works in real estate sales, says: "You need a huge pan and end up making a mess on the counter with flour everywhere. It takes at least 15 minutes to knead the dough and everything gets dirty."

When her 74-year-old mother came to Singapore last month, Ms Tanaz says the machine was the first thing she wanted to see.

"When I told my mother about it on the telephone, she couldn't understand how a machine could make chapati. When she saw my daughter using it, she was totally in awe." 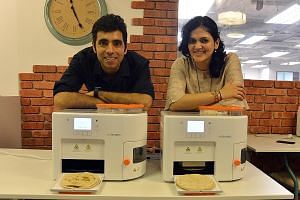 Now, her daughter Abhitha, 11, uses the Rotimatic to make her own roti and eats it at every meal.

Ms Tanaz, who also has a 23-year-old son studying in London, says: "My kids usually prefer rice, but now, they can have roti for breakfast with vegetables left over from the previous night's dinner. For a mother, that's amazing."

Since the roti-making is limited to a specific brand of flour, she says she hopes to be able to use a blend of flour eventually and to add spices to the dough.

The 54-year-old head and chief embryologist at Thomson Fertility Centre says: "I have high expectations for my roti.

"If the dough is not kneaded well, it can be rubbery and you have to chew a lot. Sometimes, it can get burnt.

"But, to my surprise, the first roti from the Rotimatic was excellent. I like the even roasting. As I work in a laboratory, I'm extremely particular about consistency."

He eats the roti with curry, egg mayonnaise and chicken cooked in an airfryer.

"My wife was surprised with the machine and relieved that I can make my own roti. If I have to leave the house early in the morning, I just press the button and get ready for work. When I'm ready to leave, the roti is ready too and I can pack it for lunch."

Ms Nicola Mok, 34, a senior analyst whose husband is Indian, spreads peanut butter and jam on the roti for her toddler's breakfast and serves it with savoury Indian dishes for lunch.

She says: "Making roti the traditional way is too time-consuming for our busy schedules, so we started eating it regularly only when the Rotimatic arrived.

"These were a hit with Indians and non-Indians."

A version of this article appeared in the print edition of The Sunday Times on August 28, 2016, with the headline 'A hit with everyone'. Subscribe
Topics:
More
Whatsapp Linkedin FB Messenger Telegram Reddit WeChat Pinterest Print Purchase Article Copy permalink