When she got married 10 years ago, Ms Pranoti Nagarkar Israni, co-founder of automatic roti- maker Rotimatic, would painstakingly make chapati, an Indian flat bread, for her husband.

The time-consuming and tedious task of kneading the dough and slaving behind the stove every day got her thinking of developing an automatic roti-maker.

As it turned out, she and her husband Rishi Israni, both 34 and graduates from the National University of Singapore, were perfectly suited to the task. 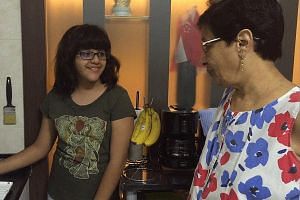 Long wait, but Rotimatic's a hit with everyone

Ms Nagarkar is a mechanical engineer, while Mr Rishi is a computer science graduate who ran his own mobile security company. So, she took charge of figuring out the mechanics of the roti-maker, while he figured out the software technology.

The India-born Singapore citizens, who have a three-year-old son, started Zimplistic in 2008. Eight years later, the company's first and only product, the Rotimatic, has finally been shipped to its first batch of customers. They had placed orders in 2014.

When speaking on promoting entrepreneurship, he cited it as one of the success stories from start-up hot spot Block 71 in Ayer Rajah Crescent. It is run by the JTC Corporation and is part of the JTC LaunchPad programme, which provides a nurturing environment for start-ups.

The machine can make up to 20 cooked roti in under 30 minutes, using only whole wheat flour, oil and water.

Users select the thickness of the roti, roast level, amount of oil and number of roti required, and press a button to start the process.

Pre-orders for the next batch of machines are likely to open next month, says Ms Nagarkar, but deliveries may be made only in the first quarter of next year, as the company is now shipping machines to customers in the United States who pre-ordered them.

Shipment has been completed for the "few hundred" Singapore orders.

Within five days of launching pre-orders in the US and Singapore in June 2014, the company received more than 8,000 orders.

Ms Nagarkar says customers were updated via e-mail about the progress and were allowed to request refunds at any time. Seven per cent of customers who preordered asked for refunds, she adds.

On the challenges faced at the beginning, she says: "Many people thought the Rotimatic was a crazy idea. Building a team and getting investors were tough. We needed to raise money and credibility."

To build buzz, she took part in the Start-Up @Singapore Business Plan Competition in 2009 and won the top prize of $40,000 for the Rotimatic.

The following year, the company got its first seed funding of US$400,000 from angel investors. In 2012, Zimplistic received US$3 million from private investors and, in July last year, another US$11.5 million of funding was received from venture capital firm NSI Ventures and global engineering giant Robert Bosch GMbH.

Calling the eight years it took to perfect the Rotimatic a "humbling experience", she says: "We took time to stabilise the system, to make sure every roti is consistent. For the past two years, we would make 2,000 roti daily in the office, to test the reliability of the machine."

Of course, the Rotimatic is not perfect. Currently, it can work with only one brand of flour - Aashirvaad whole wheat flour - which can be bought online at www.myonlinegroceries.com. It costs $2 for a 1kg bag.

If the ball of dough rolled out is not "perfect", the machine will alert users to discard the dough before churning out another batch.

Ms Nagarkar says: "For the first batch of machines that we have sent out, perhaps the first five roti may not be great. It is also a learning path for the machine."

There are plans to upgrade the software so users can make other types of flat breads and add ingredients such as herbs and spices to the dough.

The smart flat bread-maker is programmed to enable software upgrades over the cloud and remote troubleshooting via an app.

This will also allow users to get recipes from Zimplistic's in-house chef, who was initially hired to provide meals for the 85 office staff. The chef now helps in product development.

Ms Nagarkar hopes to sell the Rotimatic to other countries such as India, as well as in the Middle East and Britain.

The product will be sold exclusively online - she has no plans to sell it in supermarkets or department stores. However, she does not rule out doing product demonstrations for consumers to understand how the machine works.

On the hefty price tag, she says the Rotimatic - with its smart functions and cooking abilities - is unlike other kitchen appliances.

She says: "The making of roti - it's the same amount of hassle and pain required when washing clothes with your hands. When you have a washing machine, you realise how much time it saves you.

"Rotimatic is similar, in terms of saving you time and tedious labour. And you get a cooked product at the end of it."

• For more information, go to rotimatic.com

Correction Note: An earlier version of this story said that Block 71 is run by the Jurong Town Council (JTC). This is incorrect. It is run by the JTC Corporation. We are sorry for the error.

A version of this article appeared in the print edition of The Sunday Times on August 28, 2016, with the headline 'Easy roti in a jiffy'. Subscribe
Topics:
More
Whatsapp Linkedin FB Messenger Telegram Reddit WeChat Pinterest Print Purchase Article Copy permalink