Collectors Peter Wee and Norman Cho are driven by a passion to preserve and spread awareness of the culture.

As a child, Mr Norman Cho would often watch his grandmother pick her outfits for the day.

A typical Nonya who loved jewellery and wore kebayas, she liked to ask his opinion as she selected her clothes and jewellery to match. 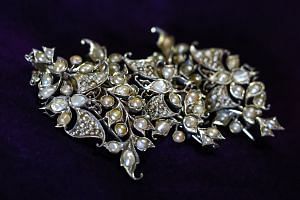 Mesmerised by the sparkling gems and their intricate designs, he enjoyed helping his grandmother pick jewellery.

"Especially for special occasions, my grandmother would have different sets of Peranakan jewellery. I would be nosy and go and see what she was up to as she selected her outfits.

"She would tell me, 'I am wearing this today, which set do you think will go well with it?'. She really loved jewellery," says the 45-year-old IT executive, of his late grandmother.

In fact, she would ask his grandfather, who owned a rubber plantation in Johor, to buy her a new piece of jewellery every other month.

It was her love of jewellery that sparked Mr Cho's interest in it. Today, the bachelor owns some of the very pieces he helped her pick out to wear.

Since he started collecting antique Peranakan jewellery more than 20 years ago, he has amassed a collection of more than 300 pieces.

Though he used to keep a catalogue of what he owned, he admits he has become lazy and that some pieces have not been recorded. Most of the collection is in the bank and the rest are kept under lock and key in colourful cloth pouches at home.

Besides inheriting pieces from his grandmother, Mr Cho has bought pieces from relatives who no longer want their jewellery.

He also got to know jewellery dealers from antique shops, such as Naga Arts & Antique in Tanglin Road and Guan Antique in Kampong Bahru Road, and from visiting jewellery exhibitions and conventions. They let him know when they have pieces they think he will be interested in. Mr Cho also sometimes trades pieces with other collectors.

Up until about 15 years ago, he used to travel to Malacca to hunt for pieces at antique shops there. But he no longer does so as he says most of the jewellery sold there are not antique.

"You can tell the difference between the old and newer pieces. The old pieces feature old mine- cut, old European-cut or transition- cut diamonds. The newer ones use modern brilliant-cut diamonds.

"The workmanship and finishing are different. It used to be manually crafted so the polish and smoothness are there. Now, some people use moulds which do not produce the same finish," says Mr Cho.

He says he usually spends an average of about $5,000 a piece. Ask how much he has spent on his collection and he dreads to calculate the cost, reckoning it is "a substantial amount".

He has honed his knowledge about Peranakan jewellery through speaking to other collectors and his elderly relatives, studying his own collection of jewellery and reading books on Peranakan culture.

He shares his expertise with a Facebook group called Peranakan Material Culture, which he started in 2012. The group has more than 2,000 members, all either collectors or those interested in the culture.

Besides sharing information on Facebook, Mr Cho also organises outings for members, such as visits to Bukit Brown cemetery, where many Peranakans are buried, and gives talks on the culture.

Besides jewellery, he also collects Peranakan beaded slippers, silverware, ceramics and furniture. These are displayed in the living room of his four-room HDB flat.

The first Peranakan antique he bought was a pair of coloured porcelain teacups, the kind usually used in wedding tea ceremonies. "I got $100 as an O-level gift from my uncle when I was 16. In those days, the antique shops sold little things for around that price, so I chose a pair of teacups. I thought they looked nice."

Asked why he has such a passion for Peranakan culture, Mr Cho says it is something he thinks should be archived and passed down to younger generations.

"As I grew up, I noticed a lot of my relatives would throw things away. Every year, when I visited them during Chinese New Year, I would find that something else was missing. It made me realise we don't have much of these antique items and furniture and, if everyone is throwing them away, then eventually this Peranakan culture will disappear.

"I thought it would be nice to slowly collect and keep these things and, over the years, my collection has grown."

• These stories first appeared in the March edition of The Life e-magazine.