Hidden away inside a two-storey shophouse in East Coast Road is a treasure trove of Peranakan culture - everything from the food and fashion to art and furniture to rites and customs.

Enter the beautiful Katong Antique House and you are immediately transported back to a more traditional time.

Lining the walls are numerous framed portraits of a multi- generational family and many of their belongings - now precious heirlooms - fill the shelves. 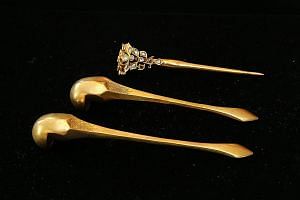 From delicately embroidered kebayas and intricately beaded slippers to hundreds of gaily painted tiffin carriers and traditional spittoons, the hotchpotch of items showcasing lives and lifestyles is a throwback to a fascinating culture.

The custodian of this treasure trove is long-time antique collector and fourth-generation Baba Peranakan Peter Wee, for whom this home turned museum and antique store has been a 40-year- long labour of love.

The literal jewels of the 70-year-old bachelor's enormous collection of items are pieces of jewellery he has painstakingly saved from his mother's collection. Harking back to the 1920s and 1930s, some of these pieces are older than he is and are in pristine condition.

Carefully unwrapping some of his favourites from a deep purple velveteen cloth, Mr Wee's passion is apparent as he expertly begins explaining the history and stories behind each piece - all the while pointing out little design details that make them quintessentially Peranakan.

On the pending or silver belt buckles (that were worn with thick silver metal belts) are intricately carved filigree-like patterns depicting phoenixes and peacocks dancing amid foliage.

There is a set of kerosang mentiara or silver chained brooches studded in pearls, a sombre mourning piece which Mr Wee's mother wore for three years after the death of her mother-in-law.

Mr Wee is the great-grandson of Malacca-born Singaporean shipping tycoon Tan Keong Saik (after whom the now-trendy Keong Saik Road is named) and grandson of businessman Tan Cheng Kee, who was also in the shipping line and started the now-defunct Alhambra Theatre in Beach Road.

A gold bracelet studded with oval bright green jade was one of the matriarch's favourites and a piece she never took off. And then there is the set of diamond earrings and a matching ring - a glittering present she bought during her golden jubilee wedding anniversary.

It is evident from Mr Wee's animated storytelling that, even after all these years, these pieces stir something deeper in him - much more than that invoked by surface beauty.

"I don't like calling these pieces priceless or putting a value on their monetary worth," he says, declining when asked to reveal how many pieces he owns or the amount he has spent on his collection.

"I think their true value is in terms of history and heritage."

Still, it is evident that the president of The Peranakan Association Singapore has a keen eye for antique jewellery pieces and knows their true worth. After all, nearly 30 pieces from his vast collection are on loan as part of a permanent exhibition at the Peranakan Museum in Armenian Street.

"Jewellery from back in the day came in classic designs - often with motifs such as peonies, foliage and mythological creatures," he explains when asked what makes antique Peranakan jewellery special.

"But more than the design, an antique piece can be set apart by its workmanship and weight. If a piece is too intricate or very light, it is likely more modern. Pieces from back in the day often had more heft and didn't have that delicate look that only modern technology can create."

His reputation still brings interested sellers to his door, often with offers to sell or requests to value old pieces of jewellery.

"Some of the pieces I bought come with sad stories, reminding me of the hard times during the war, when my own mother had to sell her beautiful collection," he says.

Growing up in a huge mansion- like family home at 67 Waterloo Street, he recalls his mother selling her precious jewels during the Japanese Occupation as the war affected the family's finances and they needed money to run the household. That taught him not to be overly attached to material things.

It was only when the family moved from their Waterloo Street bungalow in 1956 to Frankel Avenue and began discarding their items that something inside him stirred.

He realised he did not want to leave behind precious belongings, such as his mother's wedding day beaded slippers or his grandfather's old diaries.

These few treasured items started Mr Wee on the path of collecting.

Besides inheriting precious heirlooms from his family, he visited Chinese jewellers who specialised in Peranakan jewellery, took in old furniture from neighbours and scoured flea markets, thrift stores and antique auctions to hone not only his well-curated collection, but also his eye for Peranakan antiques.

"Back then and for many years after, my mother kept telling me to stop hoarding items and to throw things away," Mr Wee says with a laugh. "It was only years later that she realised how precious and invaluable these sentimental heirlooms are."

That is why he is so eager to keep the stories and memories of his culture alive.

He inherited the East Coast Road shophouse from his maternal grandfather in 1966 and, after slowly continuing to collect antiques over the years, turned it into Katong Antique House in 1979.

Of his jewellery collection, he says: "What I see in these pieces are slices of my story and our shared history. It's why I will always be happy to give these pieces of jewellery a new home. It is my life's passion to keep the Peranakan spirit alive."