NEW YORK (NYTIMES) - As the authorities investigate the bombings in Sri Lanka on Easter Sunday (April 21), their focus has centred on National Thowheeth Jama'ath, a little-known group that experts said promotes terrorist ideology.

No one has claimed responsibility for the suicide attacks, which killed at least 290 people, and the Sri Lankan authorities have so far not identified any group as being behind them, even as they arrested two dozen suspects.

But 10 days before the attacks, a police official sent an advisory to the security authorities warning of a possible threat to churches by National Thowheeth Jama'ath.

Prime Minister Ranil Wickremesinghe said on Sunday that he and other top government officials had not been informed of the threat, and that "we must look into why adequate precautions were not taken".

Until now, National Thowheeth Jama'ath was known mainly in Sri Lanka for vandalising Buddhist statues. In 2016, its secretary, Abdul Razik, was arrested on charges of inciting racism.

But while Sri Lanka, an island nation in the Pacific Ocean, was ravaged by decades of civil war that ended in 2009, it has little history of militant Islamist violence.

In that internecine conflict, the Sri Lankan government, largely led by a Buddhist elite, put down a rebellion by ethnic Tamils, who are primarily Hindu but also include Muslims and Christians. 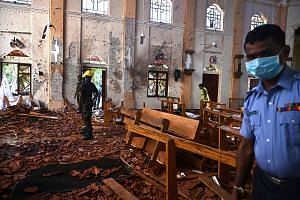 The goal of National Thowheeth Jama'ath is not insurrection, said Ms Anne Speckhard, the director of the International Centre for the Study of Violent Extremism. Instead, it aims to spread the global militant movement to Sri Lanka and to create hatred, fear and divisions in society.

"It is not about a separatist movement," she said. "It is about religion and punishing."

"These attacks appear to be quite different and look as if they came right out of the ISIS, Al-Qaeda, global militant playbook, as these are attacks fomenting religious hatred by attacking multiple churches on a high religious holiday," she said.

The Tamils were among the first groups in the world to use suicide bombings as a common tactic. The civil war ended a decade ago after a large-scale operation by the army that defeated the Tamils and killed their leader.