Police officials said that at least 35 foreigners were among the dead. A hospital source said American, British and Dutch citizens were among those killed in the six blasts.

Government officials also said access to major social media networks and messaging services, including Facebook and WhatsApp, had been shut down to prevent misinformation and rumours.

“The government has decided to block all social media platforms in order to prevent incorrect and wrong information being spread. This is only a temporary measure,” Mr Udaya R. Seneviratne, secretary to the president said in a statement.

Eight people were arrested and three police officers were killed during a security forces raid on a house in the Sri Lankan capital several hours after the rash of attacks, some of which officials said were suicide bombs.

Prime Minister Ranil Wickremesinghe said “so far the names that have come up are local”, but that investigators would look into whether the attackers had any “overseas links”.

Earlier in the day, Sri Lankan Defence Minister Ruwan Wijewardene said the culprits behind the terrorist attacks had been identified and would soon be taken into custody.

"Right now, the CID, the police and the military forces are investigating. We believe that all the culprits who have been involved in this unfortunate terrorist incident will be taken into custody as soon as possible. They have been identified," he said, according to the BBC.

"We will take the necessary actions. We will go after them, whatever religious extremism they are following. We will take action against (them) and we will stop them from operating in this country in the near future," he added.

Mr Wickremesinghe, who condemned the "cowardly attacks", called an emergency security council meeting to review the attacks, which seemed to have been coordinated.

“I strongly condemn the cowardly attacks on our people today. I call upon all Sri Lankans during this tragic time to remain united and strong,” he said in a tweet. “Please avoid propagating unverified reports and speculation. The government is taking immediate steps to contain this situation.”

President Maithripala Sirisena said in an address that he was shocked by the explosions, and appealed for calm. Finance Minister Mangala Samaraweera, writing on his verified Twitter account, said the attacks had killed “many innocent people” and appeared to be a “well-coordinated attempt to create murder, mayhem & anarchy”. 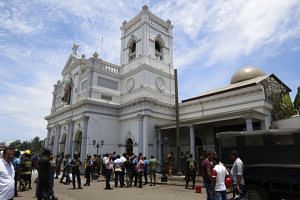 The Dutch Foreign Minister said one of the country's citizens was among the dead, while US Secretary of State Mike Pompeo said several Americans were among the casualties.

Turkey’s government said in state-run media that two Turkish citizens were among those killed. They were Serhan Narici and Yigit Cavus, engineers working on a project in Sri Lanka, Anadolu agency said, citing Turkey’s ambassador to Sri Lanka and its foreign ministry.

“Unfortunately we lost our citizens...in the treacherous attacks in Sri Lanka,” Turkish foreign minister Mevlut Cavusoglu said in a statement. Cavusoglu said the ministry was in contact with their families and it would ensure that the funerals were held in Turkey shortly.

Embassies in Colombo also warned their citizens to shelter in place, and Sri Lankan Airlines told customers to arrive at the airport four hours ahead of flights because of ramped-up security in the wake of the attacks.

As ambulance sirens wailed across several different cities on Sunday, pews at the targeted churches lay in splinters. Soldiers shut down roads and Internet transmission slowed dramatically, possibly a government effort to stop the spread of fake news. Hundreds of people rushed to donate blood after a public appeal.

Ten days before Sunday's bomb attacks, Sri Lanka’s police chief made a nationwide alert that suicide bombers planned to hit “prominent churches”, according to the warning seen by AFP.

“A foreign intelligence agency has reported that the NTJ (National Thowheeth Jama’ath) is planning to carry out suicide attacks targeting prominent churches as well as the Indian high commission in Colombo,” said the alert.

The NTJ is a radical Muslim group in Sri Lanka that came to notice in 2018 when it was linked to the vandalisation of Buddhist statues.

A senior presidential aide said early investigations suggested that the attacks had been carried out by suicide bombers.

The first explosions on Sunday were reported at St Anthony’s Church in Colombo and St Sebastian’s in the town of Negombo just outside the capital.

At least 160 people injured in the St Anthony’s blast had been admitted to the Colombo National Hospital by mid-morning, an official told AFP.

Shortly after those blasts were reported, police confirmed that three high-end hotels in the capital had also been hit, along with a church in the town of Batticaloa, in the east of the country.

An official at the Batticaloa hospital told AFP more than 300 people had been admitted with injuries following the blast there.

Damage was seen at luxury hotels including the Shangri-La, Kingsbury and Cinnamon Grand. Bloomberg reported that police and emergency vehicles have blocked the entrance to the Shangri-La Hotel in Colombo, where there was visible damage, including shattered windows, above the main entrance where a cafe is located.

At least one of the victims was killed in Colombo’s Cinnamon Grand Hotel, near the prime minister’s official residence, where the blast ripped through a restaurant, a hotel official told AFP.

A tourist, who asked not to be named, told the ABC she was eating at the second-floor restaurant of the Shangri-La when there were two blasts about 10 seconds apart.

"There was just screaming and everywhere I looked there was blood," she said, adding that the area had been full of visitors, including children.

"Everyone was just hiding, trying to work out what had just happened and what was going to happen, and we just didn't know."

Five-star Shangri-La Hotel released a statement on Sunday addressing the attacks, saying that it was "deeply saddened and shocked" by the incident.

"At approximately 9.05am local time, an explosion took place in Shangri-La Hotel, Colombo’s Table One cafe - one of several locations in Colombo which were affected by this morning's attacks," the statement reads.

"We are deeply saddened and shocked by the incident and our thoughts and prayers are with the families of the casualties and those who have been affected.

"We are working closely with local authorities and emergency services to provide our fullest assistance and support to the affected staff and guests.

"Our immediate priority is to look after the safety and well-being of all involved. A Shangri-La crisis management team has been activated to provide all necessary support.

"As this is an active investigation, we are unable to comment further at this stage. We will provide an update once more information is available."

At St Anthony’s Church at Kochcikade in Colombo, a Reuters source in the police bomb squad said: “Our people are engaged in evacuating the casualties."

Photos circulating on social media showed that the roof of one church had been almost blown off in the blast. The floor was littered with a mixture of roof tiles, splintered wood and blood. Several people could be seen covered in blood, with some trying to help those with more serious injuries. The images could not immediately be verified.

“It was a river of blood,” said Mr N.A. Sumanapala, a shopkeeper near the church who said he had run inside to help.

'It was a river of blood': Dashcam footage shows explosion outside Sri Lanka church

“The priest came out and he was covered in blood and he seemed be covered in someone else’s skin,’’ he said.

Sylvester, who was at the service at St Anthony's Shrine, told the BBC: "I heard the explosion and then the roof fell on us. We took the children and ran out from the rear door."

"But when I came to the hospital I saw my brother-in-law and son on the ground."

St Sebastian’s Church at Katuwapitiya in Negombo posted pictures of destruction inside the church on its Facebook page, showing blood on pews and the floor, and requested help from the public.

“A bomb attack to our church, please come and help if your family members are there,” read a post in English on the Facebook page of St Sebastian’s Church.

The panic of the blasts quickly spread to other churches, which halted or cancelled their Easter services.

“Our phones were on silent, but one guy got a text about the bomb blast,” said Mr Ranil Thilkaratne, who was at a service in the Colombo suburb of Nugegoda. “Then he alerted the priest. We stopped the service and moved out.”

There were no immediate claims of responsibility for the attacks in a country which was at war for decades with Tamil separatists until 2009. Bomb blasts in the capital were common during the conflict.

There have been no attacks in Sri Lanka linked to foreign Islamist groups, despite local media reports that a 37-year-old Sri Lankan was killed in Syria in 2016 while fighting for the Islamic State in Iraq and Syria (ISIS) group.

Out of Sri Lanka’s total population of around 22 million, 70 per cent are Buddhist, 12.6 per cent Hindu, 9.7 per cent Muslim, and 7.6 per cent Christian, according to the country’s 2012 census. Only around 6 per cent of the population are Catholic, but the religion is seen as a unifying force because it includes people from both the minority Tamil and majority Sinhalese ethnic groups.

Cardinal Malcolm Ranjith, the archbishop of Colombo, told local TV that the public should remain calm, and asked the authorities to bring those responsible for the attacks before the law. He also requested the public donate blood for the injured.

Education Minister Akila Viraj Kariyawasam announced that all schools would be closed on Monday and Tuesday.

In a tweet on Sunday, Mr Harsha de Silva, Minister for Economic Reform and Public Distribution, urged people to remain calm and stay indoors, adding that rescue operations were underway.

"Sec Defence and I am at Kochchikade church. Also was at ShangriLa n Kingsbury. PM is on his way from Bentota. Emergency meeting called in a few minutes. Rescue operations underway. Please stay calm and indoors. Many casualties including foreigners," his tweet read.

Sec Defence and I am at Kochchikade church. Also was at ShangriLa n Kingsbury. PM is on his way from Bentota. Emergency meeting called in a few minutes. Rescue operations underway. Please stay calm and indoors. Many casualties including foreigners.

"NO blast at Town Hall. Social media quoting @adaderana is not true. I don’t think they have issued any such alert. People PLEASE be responsible in social media postings," he posted in another tweet.

"Sad how some have no respect for the dead. Why can’t we not circulate photos of the dead? Also some are desperately working on creating racial disharmony. This is despicable. Please stop hate posts on social media. If not it will have to be stopped in the interest of peace."