NEW YORK (NYTIMES) - After a civil war that dragged on for nearly three decades, Sri Lanka had been enjoying a decade of relative calm. That was shattered on Sunday (April 21) when a coordinated bombing attack killed more than 200 people.

Here is some context to understand the latest events in the small island nation.

Sri Lanka is known for its tremendous natural beauty, which attracted more than two million tourists in 2018.

But its people have long borne a burden of violence. How the latest attack fits into history of conflict, if it does at all, was not immediately clear.

The country gained independence from British rule in 1948 as the dominion of Ceylon, and became the Republic of Sri Lanka in 1972.

But much of its history has been marred by sectarian tensions. And more recently, it has been caught up in much larger regional rivalries between China and India.

About 22 million people live in Sri Lanka, in communities that are often diverse and mixed. More than 70 per cent of the population is Buddhist.

Smaller ethnic and religious groups include Hindus, at over 12 per cent, Muslims at under 10 per cent, and Catholics at about 6 per cent. At least three churches were targeted by Sunday's bombings. 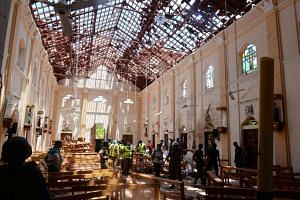 Sri Lanka explosions: What we know and don't know about the bombings

Despite their clear majority, Sinhalese Buddhist nationalists have recently been stoking fears that the minority groups, particularly the Muslims, are increasing in numbers and influence.

A long history of disenfranchisement among minority Tamil groups, who are largely Hindu, at the hands of the Sinhalese Buddhists led to a civil war in the 1980s.

The Tamil Tigers, an armed insurgent group that identified itself as secular, launched deadly attacks, including some of the earliest use of suicide bombings as a tactic of insurgency. In response, the Sri Lankan army carried out brutal campaigns, largely focused on the Tamil stronghold in the north-east.

The civil war ended in 2009 after a large-scale operation by the army that defeated the Tamil Tigers and killed its leader.

There is no exact casualty toll, but the United Nations has suggested that as many as 40,000 civilians were killed in the last stage of the war alone.

After the war, lingering scars

Many of the grievances around systematic prejudice that led to the civil war remain unaddressed.

Tamil families are still looking for thousands of people who disappeared during the war, and trying to reclaim land still held by the military. Health services are trying to address the overwhelming trauma left by those decades of violence.

'It was a river of blood': Dashcam footage shows explosion outside Sri Lanka church

With the rise of Sinhalese Buddhist nationalism, sectarian divides have continued to grow - and the country has experienced new waves of violence. A rise in intolerance has been attributed in part to the postwar triumphalism of some Sinhalese majority politicians.

Last year, officials declared a state of emergency in the central district of Kandy after Buddhist mobs attacked businesses and homes belonging to minority Muslims.

Fighting at the very top

The country has also faced political tensions at the top.

An attempt to topple the prime minister last year resulted in a protracted constitutional crisis that threatened to break into violence. For a brief period, the country had two declared prime ministers at the same time.

When it became clear that Mr Rajapaksa did not have enough votes in Parliament to make him prime minister, Mr Sirisena dissolved the body.

The two-month crisis brought the country to a standstill. Clashes alternated between the streets, where thousands of supporters from each side marched, and the Parliament, where lawmakers broke into fistfights and even hurled chilli powder at one another.