NEW DELHI - India has launched airstrikes against terror camps in Pakistan in retaliation for a terror attack in Kashmir that killed 40 paramilitary soldiers.

Early on Tuesday (Feb 26) at around 3.30am, a group of Mirage 2000 - a single engine fighter jet - dropped 1,000kg bombs on terror camps across the Line of Control (LoC), the de facto border between India and Pakistan, said ANI, a multi-media news agency.

Quoting sources, ANI said the India strikes were on Balakot, Chakothi and Muzaffarabad - terror launch pads across the LoC. It added that the control rooms of the Pakistan-based terror group Jaish-e-Mohammad (JeM) were also destroyed.

India had warned of retaliation against Pakistan since the Feb 14 suicide bombing in which 40 paramilitary soldiers belonging to the Central Reserve Police Force were killed in Pulwama district. India had blamed Pakistan for having a "direct role'' in the attack which was carried out by a young local belonging to the JeM.

While there was no official word on the attacks from the Indian government yet, Pakistan military confirmed the airstrikes and said that there were no casualties or damage. 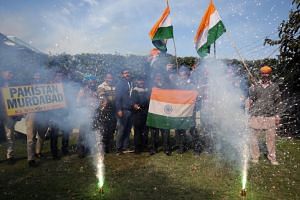 As India-Pakistan tensions rise, people in Kashmir stock up on food, fuel

India and Pakistan have fought three wars over Kashmir and regularly exchange fire across the de facto border in spite of a ceasefire signed in 2003.

India has for years continued to demand action against terror groups like the JeM and Lashkar-e-Tayyaba which have carried out multiple attacks in India, including the 2008 Mumbai terror attacks that killed 166 people.

Following the attack on the Army base in 2016, India said it had carried out surgical strikes on terrorist launch pads along the de facto border with Pakistan.

The airstrike on Tuesday gained support across an otherwise deeply fractious political spectrum in India.

While there was no official confirmation from the Indian government, Congress president Rahul Gandhi tweeted: "I salute the pilots of the IAF (Indian Air Force)."

Some, however, raised questions on where the strikes were carried out.

"If this is Balakote in KPK, it’s a major incursion & a significant strike by IAF planes. However, if it’s Balakote in Poonch sector, along the LoC, it’s a largely symbolic strike because at this time of the year, forward launch pads, militant camps are empty, non-functional,'' tweeted National Conference leader Omar Abdullah, a former chief minister of Jammu and Kashmir. KPK is Khyber-Pakhtunkhwa province of Pakistan.

Nevertheless, analysts said that this was the first direct strike in Pakistani territory since 1971. They noted that India had not launched strikes even during the Kargil war, an armed conflict between India and Pakistan that took place between May and July 1999 in the Kargil district of Kashmir.

Speculation also grew within India over whether Pakistan would retaliate. Pakistan Prime Minister Imran Khan had warned that Pakistan would give a befitting reply if attacked.

"Now the ball is on the other side. They have to decide how much they want to escalate. Do they want to go to war? We have struck what their (Pakistani) Air Force strike here (in India). We don't have terrorist camps. They can strike military installation (and) that would be (an) act of war,'' said Air Vice-Marshal (retired) Manmohan Bahadur, who is the additional director-general at the Centre for Air Power Studies, an autonomous defence research and analysis body.

"After Pulwama, it was inevitable something had to be done. Message had to be put across," he said.