Business leaders and experts delivered a stout defence of China's Belt and Road Initiative (BRI) yesterday as Beijing welcomed Italy into the fold of its mega development strategy.

Chinese President Xi Jinping's signature foreign policy and development strategy has often been criticised as a form of "debt trap diplomacy" but experts said Beijing is learning from its initial missteps and that the BRI would continue to grow.

Mr Andrew Mackenzie, chief executive of mining giant BHP Billiton, said that, given the scale and complexity of the BRI, there was bound to be the "odd misstep", but, even so, the fundamental benefits to the economy should not be overlooked.

"My sense is, as it progresses, the China push in the BRI is learning from some of those missteps, and also learning from its successes and, therefore, becoming stronger as a consequence," he said.

Mr Mackenzie added that there is a sore need for infrastructure in developing countries, a need that the BRI helps to fill.

He was speaking at a panel discussion on the BRI at the China Development Forum, an annual gathering of Chinese leaders, business leaders and academics that discusses global issues such as the economy and trade.

Mooted by Mr Xi in 2013, the BRI aims to connect China to Europe, Africa and other parts of Asia by building a network of ports, roads, railways and industrial hubs, reviving ancient overland and sea trade routes. Some 150 countries and organisations have so far joined the initiative. 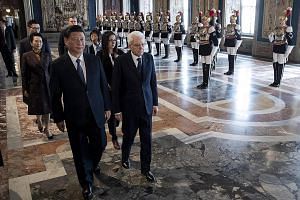 Mr Xi is on a state visit to Europe. Yesterday, he witnessed Rome's signing of an agreement to join the BRI, despite intense domestic debate over whether it should do so.

Italy will be the BRI's first addition from the Group of 7 industrialised nations, and its endorsement of the policy is seen as a coup for Beijing.

Beijing has been battling international criticism claiming that massive infrastructure projects funded by Chinese loans are leaving partner countries in debt and pliant towards Beijing.

Yesterday, business leaders pointed to how the BRI has benefited participant countries.

Mr Xu Lirong, chairman of state-owned shipping firm Cosco, said the company has created 8,000 jobs in the Greek port of Piraeus, which it runs. He added that while there was initial resistance, "local sentiment has now shifted in the firm's favour".