BRUSSELS (REUTERS) - EU leaders said on Friday (March 22) the bloc must recognise that China is as much a competitor as a partner, after calls for a more assertive policy towards Beijing over the openness of Chinese markets and the role of state-led firms.

The bloc has sought to avoid taking sides in a multi-billion dollar trade war between Washington and Beijing.

But it has become increasingly frustrated by subsidies, state involvement in the Chinese economy, and what it sees as a slow pace of change there.

Brussels will host an EU-China summit on April 9.

EU leaders had been intending to discuss China on Thursday at their summit, but their schedule was blown off course by a long day of talks over how to deal with Britain and its looming departure from the bloc.

The goal of presenting a united front on China was complicated by a simultaneous visit by Chinese President Xi Jinping to Italy, whose euro-sceptic government was due to sign an accord drawing the country into China's giant "Belt and Road" infrastructure plan.

Other largely eastern EU countries have also signed up to the plan. 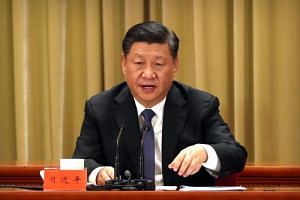 The EU debate on China will be combined with a discussion on improving the competitiveness of Europe's industry. Austrian Chancellor Sebastian Kurz said the debate was long overdue.

"China is a partner, but it is at the same time a competitor," he said. "It's crucial that there be fair trade conditions."

He also questioned why China could be regarded under World Trade Organisation rules as a developing country given special treatment, while being on course to become the largest economy in the world - a view shared by Washington.

"We need fair rules and naturally also protection for intellectual property and know-how from Europe and proper treatment of our investors in China," Mr Kurz continued.

In signs the European Union wants to end unfettered access to Chinese business, it is about to introduce a system to screen foreign investments, particularly those affecting vital infrastructure or technology.

The European Commission, which coordinates trade policy for the 28 member nations, has also urged leaders to back its plan to limit access to EU public tenders worth 2.4 trillion euros (S$3.66 trillion) to companies from countries whose procurement markets were not open.

Pro-free trade countries such as the Nordics and the Netherlands say the plan could unfairly restrict commerce and amount to a surcharge for taxpayers by shutting out cheaper providers.

The EU leaders were also due to discuss Huawei Technologies Co and whether it should be allowed to provide equipment for future high-speed 5G networks. The US government has said the equipment could be used to spy on the West.

"We need a relationship of trust. I know that there are questions now about 5G and Huawei in Europe. I think we need a base of rules to be respected by anyone who wants to do 5G in Europe," Luxembourg Prime Minister Xavier Bettel said.