BEIJING - Beijing has once again rejected assertions that its Belt and Road Initiative is a form of debt-trap diplomacy or a geopolitical tool to expand China's influence, pointing out that participant countries develop at a faster pace and have received real benefits.

The response came a day after Malaysian Prime Minister Mahathir Mohamad had warned the Philippines against becoming too indebted to China.

Chinese Foreign Minister Wang Yi countered such viewpoints on Friday (March 8) by pointing to various infrastructure projects under the BRI partner countries - including the first motorway in East Africa, a railway tunnel through deep mountains in Kazakhstan and the ongoing effort to build a high-speed rail network in Southeast Asia.

"Facts like these are proof that the BRI is not a debt trap that come countries may fall into, but an economic pie that benefits the local population. It is no geopolitical tool but a great opportunity for shared development," said Mr Wang, speaking at a press conference on Friday held on the sidelines of China's annual legislative meetings in Beijing.

On Thursday, on a visit to Manila, Dr Mahathir had sounded a warning to the Philippines which is tapping funds from China to build its infrastructure. He had said: "If you borrow huge sums of money from China and you cannot pay, you know when a person is a borrower he is under the control of the lender, so we have to be very careful with that." 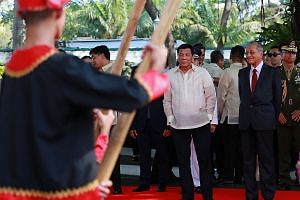 Some 123 countries and 29 organisations have signed on to the BRI since it was proposed six years ago, said Mr Wang on Friday, calling it a vote of confidence and support for the development strategy by Beijing.

Mooted by Chinese President Xi Jinping, the BRI aims to connect China to Europe, Africa and other parts of Asia by building a network of ports, roads, railways and industrial hubs, reviving ancient over land and over sea trade routes.

But it has also been described as being a form of debt trap diplomacy, where massive infrastructure projects funded by Chinese loans leave partner countries in debt and pliant toward Beijing.

Critics often cite the Hambantota port in Sri Lanka, which began as a joint venture in 2008. But Sri Lanka was unable to repay the loan and was forced to cede control of the port to Chinese firms on a 99-year lease.

But Mr Wang said that BRI has become the largest platform for international cooperation and a global public good.

"Signing up for the BRI has enabled countries to grow at a faster pace, improve their people's lives and reap win-win outcomes," he said.

He also said that the Belt and Road Forum due to be held in Beijing next month (April) will be the most important diplomatic event China would host this year.

Thousands of delegates from over a hundred countries are expected to attend the forum – including Singapore’s Prime Minister Lee Hsien Loong – where agreement is expected on key projects..