AYER KEROH, MELAKA - A vice-president of Parti Keadilan Rakyat (PKR), Mr Tian Chua, was jeered on Sunday (Dec 8) when he slammed party members for being "apple polishers" and risked becoming "extreme and obsessed" about making its president Anwar Ibrahim the next prime minister of Malaysia.

Mr Chua, who is aligned to the rival Azmin Ali faction in PKR, defended the supporters of the deputy president who boycotted the Sunday closing ceremony of the party's national congress.

The increasingly bitter feud between Datuk Seri Anwar and Datuk Seri Azmin is closely watched in Malaysia, as PKR has the largest number of MPs in Parliament, 50.

A "dinner event" was held on Sunday night in Kuala Lumpur involving Mr Azmin, but Mr Anwar denied at a news conference in Melaka that it was a "rival congress" as touted by some. Mr Anwar said he had been invited but could not attend due to a prior programme at his own house.

Mr Chua, in his speech at the closing ceremony, criticised attending delegates holding banners proclaiming Mr Anwar as the eight prime minister, and said he did not need to do so to prove his loyalty to the leader.

"It is not about the eighth PM, ninth PM or 10th PM. We will see our supporters being more extreme and obsessed. That is the danger," Mr Chua said. "It is not about Anwar. After Anwar, there will be other prime ministers and other presidents."

Warning that the party was turning into a cult, he said: "If you want to make this party into a party that supports its president absolutely without question, I think it is up to the wisdom of Datuk Seri Anwar Ibrahim to save us from this crisis.

"We want to avoid this party from becoming a party that has no aim and only has one mission, which is to put their leader in power."

Mr Chua, who is one of the three elected PKR vice-presidents, defended those aligned to Mr Azmin, saying they were not "traitors", amid loud boos from delegates.

He reminded them not to forget the reformists like vice-president Zuraida Kamaruddin, a staunch ally of Mr Azmin, and noted that the party would not have won last year's general election without Mr Azmin leading Selangor as Menteri Besar. 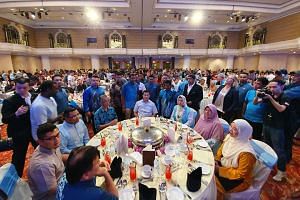 PKR congress: Azmin asserts loyalty in show of strength at his own meeting

PKR's four-day annual congress that started last Thursday has been wracked by violence, walkouts, and verbal attacks on the other side.

The two factions cobbled together a fragile last-minute peace deal last Wednesday but that failed to last beyond two days.

The youth wing meeting last Friday saw bloody brawls between the two factions, including one that spilled onto the street outside the meeting venue at the Melaka International Trade Centre.

On Saturday during the main congress, Mr Azmin and his camp staged a mass walkout that left the hall more than half empty.

Mr Chua was on Sunday the only top leader aligned to Mr Azmin to turn up to speak at the winding up of the congress.

Women's vice-chief Sangeetha Jayakumar, also allied to Mr Azmin, represented the wing, and was also booed when she extolled the virtues of leaders from both camps.

Mr Anwar, in his closing speech, defended Mr Chua, saying he was a negotiator.

He also said that he was patient and tolerated the walkout by Mr Azmin and his allies on Saturday during delegates' debates.

"Walkouts, I can still be patient. But I can't be patient when it comes to corruption," he said.

Mr Azmin and his allies had accused Mr Anwar of insinuating that the former was a "traitor" in his policy speech on Saturday, thus breaking the terms of a ceasefire brokered on Wednesday ahead of the congress.

Mr Azmin had said one of the promises made was that there would be no attacks or slurs made against him by delegates during the congress.

He has since reminded people of his contributions to the party, with an online tweet on Saturday which read: "Because of this traitor, this party was built over 20 years."

But Mr Anwar said in his speech that he was unable to control what delegates would say.

He later told a news conference that he could not help it if delegates criticised Mr Azmin for walking out of the congress.

"He (Azmin) said we must ensure delegates will not use the forum to attack, but if they say they want leaders to observe discipline, how do I control that? I merely want delegates to avoid casting aspersions or personal attacks, which 90 per cent have avoided except when they walked out, then you have lost control," said Mr Anwar.

When asked for his response on Mr Chua's comments on blind loyalty, Mr Anwar said: "It is according to which camp you are in. They (members) are quite critical too. It is better for them to focus on policy matters."

Despite the boycott by Mr Azmin's faction, Mr Anwar said that 80 per cent of delegates were in attendance. But there is talk that those without tags to attend the congress had been allowed into the hall, in stark contrast to the tight security last Friday, when some members were not allowed in.

Groups of young people in black T-shirts and wearing "observer" tags were seen in the hall during the closing ceremony to fill up the seats.