NEW DELHI (BLOOMBERG) - Indonesia's Lion Air plans to drop a US$22 billion (S$30 billion) order for Boeing's 737 Max 8 jetliners and switch to rival aircraft from Airbus as a rift between the companies widens following this week's crash in Ethiopia, a person with knowledge of the proposal said.

Lion Air was already looking at scrapping the Boeing deal after one of its own Max 8 planes came down on Oct 29, killing 189 people, and the African tragedy has made co-founder Rusdi Kirana more determined to cancel the contract, according to the person, who asked not to be named as the plans are private.

The move provides the first evidence of Boeing's order book being hurt following Sunday's crash, in which 157 people died when an Ethiopian Airlines 737 plunged to the ground six minutes after takeoff. The incident bore clear similarities to the Lion Air tragedy, and countries including China, Australia and Singapore, as well as Ethiopia and Indonesia, have grounded the aircraft.

Lion Air is now evaluating jets from Airbus's A320 family, the European company's competitor to the 737 in the single-aisle market, with the focus on the biggest A321neo variant, the person said.

While Lion Air declined to comment on the future of its 200-plane Max order, Daniel Putut, a director at the company, said in Jakarta on Tuesday that it had suspended delivery of four jets due this year. A spokesman for Chicago-based Boeing declined to comment.

Relations between Lion Air and Boeing deteriorated last year after the US company pointed to maintenance issues and pilot error as the underlying causes for the loss of flight JT610 in the Java Sea, even though preliminary investigations had found that the 737 came down after a computerised system took control following a sensor malfunction.

Anger over the planemaker's comments led Kirana to say in December that he planned to cancel Lion Air's order, the third-biggest for the upgraded model. 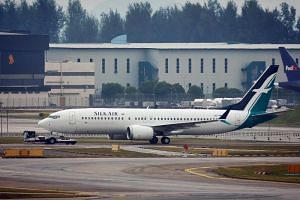 The largest Indonesian carrier by domestic market share has already refused to take delivery of a 737 Max jet due this month, said the person. It informed Boeing of the decision in February, they said.

Lion Air spokesman Danang Prihantoro said the company won't comment further on delivery plans beyond this year and will provide updates on new developments when appropriate.

Losing the deal with Lion Air, which has 10 remaining 737 Max planes in its fleet plus three in Thailand, including the first one to enter commercial service, would come as a blow to Boeing, adding to a headache from the growing crisis around plane groundings.

Since the Lion Air crash, Boeing has emphasised the Max's safety and defended the anti-stall Maneuvering Characteristics Augmentation System that pushed the Lion Air plane's nose down a dozen of times before it crashed.

Pressure on the company ramped up further on Tuesday as Singapore and Australia moved to block the plane from their airspace, with Singaporean authorities saying they need to gather more information on the "safety risk" associated with the model.

In a separate report, President Director of PT Garuda Indonesia Gusti Ngurah Askhara said on Tuesday that Garuda is also seeking to drop its orders of 49 Boeing 737 Max 8 jet planes from Boeing and change them with other types of planes, Xinhua news agency said.