SINGAPORE - Singapore and Indonesia announced the renewal of a US$10 billion currency pact, which will help support monetary and financial stability in the region.

Both countries will continue to have access to each other's currency as well as US dollars, to settle trades or defend their currency in times of financial stress.

This was announced by Prime Minister Lee Hsien Loong and Indonesian President Joko Widodo at the Istana on Tuesday (Oct 8) as part of an annual leaders' retreat.

"A renewal on existing terms will help support monetary and financial stability in our countries and also in the region," said PM Lee at a joint press conference after a meeting between the leaders and an expanded meeting between their delegations.

The local currency swap and US dollar repurchase agreement, which was signed at the previous leaders' retreat in Bali last October, will be renewed for a year.

Through this deal, Bank Indonesia and the Monetary Authority of Singapore can obtain each other's currencies at the prevailing exchange rate, with the agreement to reverse the transaction at the same exchange rate on a specified maturity date.

Both central banks will also allow each other to obtain US dollars from each other in exchange for government securities, with the agreement to reverse the transaction on a specified maturity date.

Such an agreement will help reduce the uncertainty and risk that can stem from exchange rate fluctuations and provide liquidity to the banking system, or to support the domestic currency during periods of volatility.

At Tuesday's retreat, both leaders affirmed the importance of the bilateral investment treaty, which offers protection for Singapore companies in Indonesia, as well as Indonesian companies in Singapore.

Singapore has ratified the pact and it could come into effect once it is approved by the Indonesian Parliament. 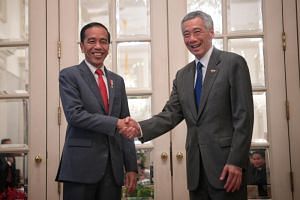 Singapore and Indonesia looking out for new opportunities to work together: Vivian Balakrishnan

More work will also be done to update the Avoidance of Double Taxation Agreement, which came into force in 1991.

"Both agreements would boost investor confidence and further increase two-way trade and investment flows," said Singapore's Ministry of Foreign Affairs in a statement.

Singapore has been Indonesia's top investor since 2014 with investments from Singapore to Indonesia reaching US$9.2 billion in 2018.

PM Lee and Mr Joko also welcomed the good progress that had been made on flagship bilateral investment projects.

PM Lee noted that the Kendal Industrial Park in Central Java "continues to thrive", and the Nongsa Digital Park in Batam has also done well.

The Kendal Industrial Park has attracted over US$800 million in investments from almost 60 companies since it was opened at a previous leaders' retreat in 2016. And it is projected to create 7,000 jobs.

"Nongsa Digital Park is the digital bridge connecting the two countries, as defined by President Jokowi, and we are confident that under his second term, focus on digital economy will remain strong," said Nongsa Digital Park's senior executive director, Mr Marco Bardelli.

Mr Bardelli hopes that the park will eventually become the "birthplace of next Indonesia's unicorns".

As part of expanding collaborations in the digital economy, Singapore and Indonesia signed a pact on Tuesday to electronically link up the national single windows of both countries.

This electronic exchange of trade data will allow both customs administrations to expedite clearance of trade and enhance supply chain security through better risk management, said Singapore Customs in a statement.

On the tourism front, PM Lee pointed out that cruise tourism cooperation is "cruising" on well.

Since both leaders' last visit to the Marina Bay Cruise Centre in 2017, new cruise routes from Singapore to Bintan, Surabaya and Bali have been launched.

Both leaders also noted that there had been strong interest from Singapore to be involved in infrastructure projects in Indonesia.