SINGAPORE - Twenty fighter jets cut through the Marina South skyline in the shape of the numeral "50" on Thursday (Sept 7), capping off one of the highlights of the golden jubilee celebrations between Singapore and Indonesia.

Prime Minister Lee Hsien Loong and Indonesia President Joko Widodo were at Marina Bay Cruise Centre to witness the fly-past, which was conducted by the air forces from each side to mark 50 years of diplomatic relations between the two neighbours.

Called the SAF-TNI Counter-Terrorism Table Top Exercise, it will take place from Nov 27 to 30.

In a Facebook post, the minister also said that the combined celebrations “reflect the strong defence ties forged through years of engagement and cooperation against common challenges”.

The combined fly-past was the largest and most complex one that the Republic of Singapore Air Force (RSAF) has conducted with any foreign air force to date, and is "a strong testament to the interoperability and mutual understanding between the two air forces", said a Mindef statement on Thursday.

The leaders were attending the Indonesia-Singapore Leaders' Retreat. President Joko was accompanied by First Lady Iriana and a high-level delegation. 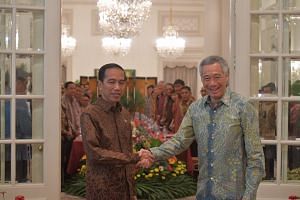 Singapore and Indonesia are neighbours by geography, partners by choice: PM Lee and President Jokowi

About 1,800 turn up to meet President Jokowi at Indonesian embassy in Singapore

RISING50: Celebrating 50 years of bilateral relations between Indonesia and Singapore

Ten F-16 aircraft each from the RSAF and Indonesian Air Force (TNI-AU) assembled in the south-west of Singapore before flying past twice, once in arrowhead formations and another forming the numeral "50".

Five RSAF F-15SGs then did a bomb burst manoeuvre to complete the fly-past.

In the 20 minutes between the two formations, the SAF Central Band and the TNI Academy Drum Band put up both separate and combined performances.

The RSAF's Colonel Ho Kum Luen, 38, who is the co-chairman of the joint working group organising the fly-past, said that one of the many challenges involved in the six-month preparation was manoeuvring the whole formation of aircraft.

"Because it's such a big formation, it's very difficult to manoeuvre the whole formation... We had to get everything right down to the second."

Following the fly-past, four of the participating RSAF F-16s landed in Roesmin Nurjadin Air Force Base in Pekanbaru, Indonesia, for a celebration involving the chiefs of air forces, senior officers, members of the organising committee and other fly-past participants.

RSAF Chief of Air Force Major-General (MG) Mervyn Tan, who was on board one of the RSAF aircraft in the fly-past, said: “I think the fly-past is really a testament of the skill as well as the professionalism of the pilots of our air forces.

“More importantly, I think it underscored the trust and mutual understanding between the personnel of both our air forces.”

MG Tan’s counterpart, Chief of Staff of the TNI-AU Air Chief Marshal Hadi Tjahjanto, who was also on board one of the Indonesian F-16s, said: “I believe the military cooperation between TNI-AU and the RSAF will be everlasting and we will always support each other.”

The RSAF and TNI-AU first started having exercises together in 1980. Since then, the two sides have engaged in a wide range of exercises and activities such as visits, professional exchanges and cross-attendance of courses.

Lieutenant-Colonel Tan Hwee Roy, 40, the mission lead for the fly-past who shared the cockpit with MG Mervyn Tan, said: “Today was an extraordinary experience... I hope everybody down on the ground enjoyed the show, because we certainly enjoyed flying together.”

TNI-AU mission lead Lieutenant-Colonel Yoga Ambara, 39, said he was “very happy” because it was the first time the two countries were doing a formation together.

“This is a new history for Singapore and Indonesia, we worked together and accomplished the mission very well,” he added.