PETALING JAYA (THE STAR/ASIA NEWS NETWORK) - You may soon be able to get AirAsia's in-flight nasi lemak meal on the ground.

AirAsia Group CEO Tony Fernandes said in an interview with US talk show host Larry King that there were plans afoot to start a fast-food restaurant offering the low-cost carrier's popular in-flight meals.

"I think our food is fantastic. We believe in it so much we're going to start a fast-food restaurant out of it."

Santan is the name of AirAsia's in-flight menu, which markets its food as a "gourmet in-flight dining experience".

Mr Fernandes said this in response to a question from the audience as he promoted his 2017 autobiography, Flying High: My Story: From AirAsia To QPR.

He added that the airline industry was making use of the technological revolution to make flying more comfortable. 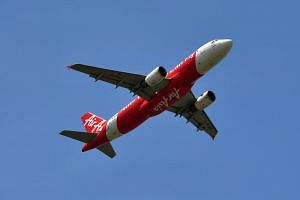 AirAsia boss Tony Fernandes: Back in captain’s seat to make AirAsia the best that it can be

"We are working on seat technology all the time. Boeing is working on better cabin pressure, so it feels better," he said.

"A lot of technology is coming. We are working on face recognition technology to help you board; we're working with governments so you can get pre-approved and don't have to stand in queues; and better security techniques," he added.

His tip to scoring the cheapest flight ticket is simple - buy early.

"The earlier you buy, the cheaper it is," Mr Fernandes said, adding that the Internet had made flight fares transparent.

He said AirAsia worked on a "classic economics elasticity model" where they would create demand by offering low fares, and charged more when there was demand.

Reflecting on his journey from failed medical student and accountant to Warner Music Group's vice-president and now airline mogul, Mr Fernandes said the worst advice he ever received was: "Don't buy AirAsia."

One of his proudest achievements with AirAsia was supporting the community of female pilots, he said.

"We do employ a lot of female pilots. It's something we are very proud of."

"I went to my chief pilot, and I asked 'why are there no female pilots', and he came up with the most ridiculous answer that can never be repeated in public."

"I said if a woman can run a country, she can certainly fly a plane. We now have 150 female pilots," he told King.

Mr Fernandes also relished in recounting a recent AirAsia flight where all crew, including the pilot, co-pilot, cabin crew and chief engineer were female.

He said in terms of percentage, AirAsia had more female pilots than any airline in the United States.

Mr Fernandes said he did not have many regrets, but if there was one thing he would do differently, it would be to manage the Queens Park Rangers football club better.