JAKARTA - A wedding is indeed on the cards for former Jakarta governor Basuki Tjahaja Purnama.

Rumours about his impending marriage to his ex-wife's former aide had been making the rounds weeks before his release from prison on Thursday (Jan 24).

But the first confirmation from Mr Basuki himself came in videos that have swiftly gone viral since it was uploaded on YouTube on Friday evening.

In the clips of his meeting with Hanura party chairman Oesman Sapta Odang, the former governor was asked whether the rumours about an upcoming second marriage were true.

He replied: "Yes, because my mother said 'Hok, I can't take care or live with you any longer.'... She also said 'Your wife should be my replacement to cook, make cakes, and take care of you. That last one didn't want to.'"

Mr Basuki, who is popularly known as Ahok, divorced his wife of more than 20 years, Madam Veronica Tan, in 2018.

Details about her affair with married businessman Julianto Tio were revealed in court during divorce proceedings.

Mr Basuki, 52, added that his mother advised him to get married soon - before he turned 55.

He confirmed that his future wife was former policewoman Puput Nastiti Devi, 21, who has been a fixture at his side since his release.

His mother, he said, has been healthier since his relationship began.

Ms Puput, who was also seen in the video clips, said: "She knows there's somebody to take care of her son. She trusts me."

It is believed that Mr Basuki's former wife had often asked Ms Puput, who hails from a family of police officers, to deliver food to him when he was in jail for blasphemy against Islam.

Media reports said that marriage forms have been submitted for the wedding as some of Mr Basuki's close friends and allies claimed a marriage was impending. 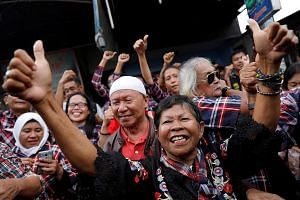 Political comeback for Ahok? Not so soon 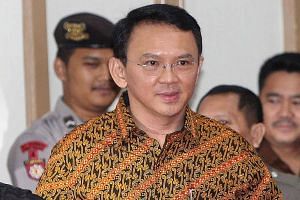 A district official said he had signed and prepared papers for the nuptials.

But, responding to the widespread reports, Mr Basuki's sister and lawyer said his family was unaware of any wedding plans.

Mr Basuki told Mr Oesman that Ms Puput had long helped his mother with cooking, and also shed some light on how they first met.

Ms Puput became a familiar sight after full police protection was ordered for the former governor's family following an anti-Ahok rally in Jakarta in 2016, which saw thousands of Muslim hardliners who believed that he had insulted the Quran take to the streets.

"It's a funny story," he said, adding: "I never thought I would date a female police officer."

Ms Puput resigned from the police force on Jan 9.

"One of my friends told me I should marry somebody with the same lines on the palm of our hands," said Mr Basuki, inviting Ms Puput to compare the lines of her palms with his.

Mr Oesman said: "They really are a match."

While some speculation over his personal life may have been put to rest after the YouTube videos, many are also still curious to know more about Mr Basuki's future plans.

But those looking forward to the former governor's first media interview since his release, which was initially set for Saturday (July 26) evening, will have to wait a while more.

Hours before the scheduled interview, Metro TV said Mr Basuki's side had requested a cancellation "due to his busy schedule".  A spokesman for the station said the interview would be rescheduled, but gave no date.