Ex-Jakarta governor hints in letter he's a changed man, ahead of release from jail

JAKARTA • Former Jakarta governor Basuki Tjahaja Purnama has hinted at the entirely different person he has grown into during his time in prison in a handwritten letter posted on social media.

He has asked his supporters to stop calling him Ahok and to instead refer to him as BTP, the initials of his full name.

He also said that he apologised to those who may have been hurt by his remarks while in office.

The 52-year-old is scheduled to be released next Thursday, after completing his two-year sentence for blasphemy.

"Ahok" is the Hakka Chinese name his father gave him, and is widely used to refer to him.

In the letter dated Thursday, Basuki said his time in prison had allowed him "to learn to take full control of myself for the rest of my life", something he would have been denied had he retained the Jakarta governorship in the April 2017 election against challenger Anies Baswedan.

Basuki, a Christian, said he was grateful to God for allowing him to lose the gubernatorial election and to serve his prison term at Mako Brimob - the national police's Mobile Brigade Corps headquarters - in Depok, West Java. 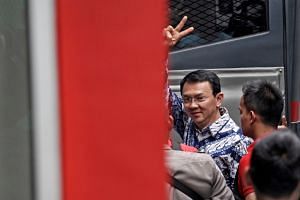 Why Ahok remains a man to watch in Indonesian politics: The Jakarta Post columnist

A slap in the face of Indonesian justice system from Ahok

He wrote that if he could turn back time and was asked to determine his own fate, he would choose to serve his prison sentence over "ruling City Hall for five (more) years", which would have only made him "more arrogant, ruder" to hurt the feelings of many others.

He was governor of the Indonesian capital from November 2014, but lost in the April 2017 gubernatorial election.

Known for his blunt remarks while in office, Basuki said he penned the letter to express his gratitude and to apologise for the turn of events he has faced over the last three years.

His legal team uploaded pictures of his two-page, handwritten letter to his official Instagram account on Thursday. The caption for the letter reads: "The following is BTP's latest letter to address his supporters' well-intentioned plans to welcome him at Mako Brimob upon his release and other messages."

Basuki asked his supporters not to wait at Mako Brimob for his release, so as not to bother people during a working day.

He also encouraged them to vote in the April 17 presidential election.

He apologised to the Jakarta civil service corps and even his haters for "all (my) words and actions, whether incidentally or not, that have hurt their feelings".

He is scheduled to be released next Thursday, three months and 15 days shy of his two-year sentence - which he began serving on May 9, 2017 - due to remission of the sentence.

The former governor was sentenced for blasphemy following a speech he made in the Thousand Islands regency in September 2016 that referred to a verse from the Quran. He had said that the verse had been used to deceive people into voting against him.

His political enemies pounced on those remarks as blasphemy.

The court case played a major role in his defeat in the 2017 Jakarta gubernatorial election.