Mr Zulkifli said on Friday (May 10) that all parties need to reconcile and accept the winner of last month's presidential election, after meeting with President Joko Widodo and a number of state officials.

"No matter who is elected (as president) we have to get together to ensure that his programmes will be successful," Mr Zulkifli said in his speech at a breaking-of-fast function at his residence that was attended by Mr Joko.

He added that political parties could again contest in 2024, referring to the next presidential election.

Mr Zulkifli's stance contrasted with Mr Prabowo's view that he had won the April 17 presidential election, and that massive voting fraud took place that put Mr Joko ahead in the ongoing count by the General Election Commission (KPU).

The PAN chairman said he would not overrule the KPU and called for all parties to wait for the announcement of the official results. 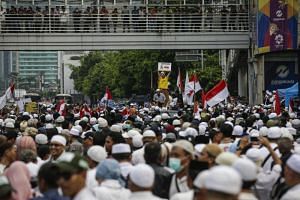 Official results are expected to be announced by KPU by May 22.

The remarks by the PAN chairman have added to speculation that his party and another opposition party, the Democratic Party led by former president Susilo Bambang Yudhoyono, might break away from the Prabowo camp, and join Mr Joko's ruling coalition.

Mr Yudhoyono's son Agus Harimurti Yudhoyono on May 2 met with Mr Joko, and said everyone must wait for KPU's announcement of the results before taking any action.

Mr Agus, the leader-in-waiting in the Democratic Party, met Mr Joko at the presidential palace, but had brushed speculation over the meeting by saying it was merely a courtesy call on the president.

The Joko-Agus dinner was also attended by Democratic Party executive Agus Hermanto, who is the House of Representatives deputy speaker, alongside House Speaker Bambang Soesatyo and Vice-President Jusuf Kalla.

Interim results of legislative polls, also held on April 17, indicate that members of Mr Joko's coalition are set to occupy more than 65 per cent of the seats in Parliament.

A back-of-the-envelope calculation shows that this could possibly rise to 80 per cent if the Democrats and PAN switch sides.

The move by PAN's Mr Zulkifli to break fast with President Joko came as Prabowo's supporters pressed ahead on Friday with a rally accusing President Joko's camp of election fraud after quick-count results put the incumbent on course for victory.

The Prabowo camp held the rally, which they described as "people power", after they reported data entry errors on Situng, the KPU vote tally website, which they claimed to be evidence election fraud, to the Elections Supervisory Agency (Bawaslu).

The rally in front of the Bawaslu building saw thousands of Mr Prabowo's supporters identifying themselves as the Coalition of People and Ulema (clerics) and demanded Mr Joko be disqualified from the presidential race.