JAKARTA - Presidential hopeful Prabowo Subianto on Monday (May 6) called for irregularities in data entry from polling stations to be corrected, as his team unfurled a long list of charges against the election authorities and incumbent Joko Widodo that he said show the "blatant and flagrant violation of basic norms of democracy" in Indonesia's April 17 elections.

The wide-ranging claims include data entry errors of votes from at least 73,000 polling stations so far, 6.7 million voters not getting an invitation to vote, irregularities in the official voter roll, difficulties faced by the opposition in securing campaign permits, and the mobilisation of civil servants in Mr Joko's campaign efforts, as well as the use of state-owned enterprises to finance his campaign.

Quick-count results from independent pollsters, as well as tallies from an ongoing real count by the General Elections Commission (KPU) place Mr Joko on track to securing a second term but have been disputed by Mr Prabowo's team.

After polls closed on April 17, Mr Prabowo declared himself victorious, citing how his team's assessment had him winning 62 per cent of the votes.

Official results are expected to be out before May 22.

Citing the data entry errors in KPU's real count of votes, Mr Prabowo said at a press conference for foreign media: "What we are asking for is a correction of all the irregularities. We want an IT audit. It's as simple as that. All these false entries must be corrected. That's all we ask.

"We're asking for the verification and the correction of all these irregularities. If they correct this before the 22nd, it's very easy. If they are serious, we have a lot of experts. We can get international experts. Just get a rational IT audit." 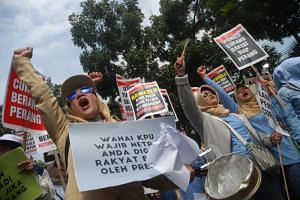 He added: "Our request is for a correction of irregularities that will show a commitment for a true and fair democratic process."

An audit by an independent third party body acceptable to both camps would be reasonable, he said.

This came after a flurry of questions during the press conference on whether Mr Prabowo would launch a legal challenge or call on his supporters to take to the streets if official results are not in his favour.

He had contested the result of the 2014 presidential election - in which he was defeated by Mr Joko - in the Constitutional Court, blaming his loss on massive electoral fraud.

His lawyers claimed that 56,000 polling booths had been tampered with, putting in question the validity of around 23 million votes, and demanded that the nine-judge court annul the results, disqualify Mr Joko as the winner and hold another election.

But the court said that Mr Prabowo's lawyers had failed to prove that there was significant electoral fraud and dismissed the challenge.

While he did not definitively say that he would launch another legal challenge this time around, Mr Prabowo acknowledged there was legal recourse such as the Constitutional or Supreme Court, but added that his team was "pessimistic" that justice would be served.

There have been growing worries that massive protests could break out over the official results, with some of Mr Prabowo's allies, such as veteran politician Amien Rais, the honorary council chairman of the National Mandate Party, urging people to take to the streets in a "people power" movement.

After some back-and-forth with journalists asking whether he would call on supporters to protest in a show of discontent, Mr Prabowo said: "Whatever the people do, it's the decision of the people. I'm not a dictator. I will not say do this or that… I will not call people to go to the streets, but I am convinced they will. Because, if you look at history, the Indonesian people are not goats. They're not going to just accept."

And Mr Prabowo himself, who said that evidence of electoral fraud this time around is "piling up", does not look set to go down without a fight.

"This time, I will not accept a fraudulent outcome. In 2014, I really did not accept in my heart, but for the good of the country, I gave it the benefit of the doubt. I came to the inauguration, I congratulated (Mr Joko)," he said.

"For the good of the people, for the good of democracy, I wanted to be a good sport, but this time the violations are too much. So it's impossible. I will not accept a fraudulent election."