It has been a whirlwind few days since Indonesia pulled off its first simultaneous presidential and legislative elections. The Straits Times looks at how the historic April 17 polls turned out and what comes next.

Voter turnout had been a major concern with fears that abstention rates could exceed 30 per cent.

Indonesia has seen a steady decline in turnout since free elections were introduced after the fall of the Suharto regime in 1998. In 1999, 7.3 per cent of eligible voters failed to show up. That had rocketed to 29 per cent in the 2014 elections.

But the April 17 polls seems set to buck that trend.

Indonesia’s General Election Commission (KPU) noted that voter enthusiasm for this year’s polls - the first time the president and MPs were picked on the same day - was higher than expected and predicted that turnout would exceed its target of 77.5 per cent.

President Joko Widodo said in a Facebook post on Friday that almost 81 per cent out of the more than 190 eligible voters showed up.

This came as a surprise, considering a movement calling for people to abstain from voting had been growing in fervour ahead of the polls. 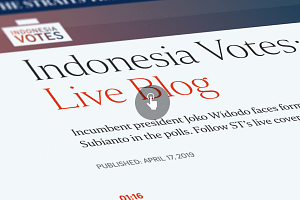 While many had earlier expected a big turnout to work in favour of the popular incumbent, Mr Joko, it may have inadvertently helped buoy rival Prabowo Subianto's polling numbers instead.

In Pictures: Catch the action and drama from Indonesia's presidential election

Observers pointed to how a higher-than-anticipated number of people could have turned out to vote against the President as a form of protest while factors like growing Islamisation and Mr Prabowo's strong support among conservative Muslim groups and popular preacherslikely helped him mobilise voters.

2. When will official results be out?

There is still a long way to go until an official result. KPU chief Arief Budiman said it may now take up to 35 days for "real counts" to be completed.

Counting is, after all, a logistical feat. It is being conducted in stages, with ballots first being manually counted at the more than 800,000 polling stations around the country.

Then results at the stations of each of the 7,201 sub-districts are totalled and combined to give the number of votes in each of the 514 districts and cities.

These are then added up to give numbers for each of the country's 34 provinces before results are finally consolidated at the national level.

Mr Arief said the process could be completed faster, depending on the speed of data entry.

Vote counts from Indonesians abroad are also still coming in. Most results so far favour Mr Joko and his running mate Ma'ruf Amin, with the pair scoring landslide victories in several countries, including Vietnam and Timor Leste.

Videos showing ballots in Malaysia marked in favour of Mr Joko and Dr Ma'ruf prompted an investigation into vote-rigging. Indonesia's election watchdog recommended having some of the Indonesians living in Malaysia cast their vote again by mail.

That will have to wait for the official tally but quick-count results, which started trickling in two hours after polls closed, have proved accurate in past elections, including the 2014 presidential race.

These unofficial tallies place Mr Joko on course to secure a second term - and have drawn markedly different reactions from the two presidential hopefuls.

Mr Joko noted on Thursday that unofficial tallies by 12 survey institutions point to him and Dr Ma'ruf winning 54.55 per cent of the vote to their opponents' 44.45 per cent, but he held off on declaring victory.

"We all know that quick counts are based on science, and our past experience in previous elections showed that its accuracy to the real count is 99 per cent," he said. "But we have to wait for the official results from KPU, which we hope will be completed as soon as possible."

Mr Prabowo, meanwhile, was keen to dispute quick-count results, declaring himself the winner instead, just as he did in 2014.

He has charged that there have been "anomalies" in the election process that have hampered his supporters, dubbed the independent pollsters tasked with conducting quick counts "liars" and insisted that his team's own real count has so far given him 62 per cent of the vote.

He told supporters on Wednesday night in what amounted to a victory speech: "This is a victory for the Indonesian people ... I will be and I am already the president of all Indonesians."

4. Can the outcome be changed?

He took his case against the KPU to the Constitutional Court to contest the result of the July 9 presidential poll, blaming his loss on massive electoral fraud.

His lawyers claimed that 56,000 polling booths had been tampered with, putting in question the validity of around 23 million votes.

They demanded that the nine-judge court annul the results, disqualify Mr Joko as the winner and hold another election.

But the court - whose decisions are final and binding - said after a two-week hearing that Mr Prabowo's lawyers had failed to prove there was significant electoral fraud and dismissed the challenge.

Mr Prabowo may well try again if official results hand him another defeat but the odds are against him.

The Constitutional Court has never overturned a national election result.

5. How did parties do in the legislative election?

All eyes were on the presidential polls but the legislative elections to pick MPs and leaders at the local and regional level were a crucial sideshow.

The presidential battle seems to have had an impact in the legislative race, with major parties backing the two presidential contenders benefitting from a coat-tail effect.

Mr Joko's Indonesian Democratic Party of Struggle looks set to keep its mantle as the party with the most seats in Parliament, with a number of pollsters pointing to it winning over 19 per cent of the vote.

Quick counts also indicate that Mr Prabowo's Gerindra party came in second, with about 13 per cent. This means the party would be the runner-up in Parliament for the first time since its establishment in 2008.

It switched places from the 2014 election with Golkar - part of the coalition backing Mr Joko - which now ranks third with about 11.89 per cent of the votes.

Other parties in that coalition - the National Awakening Party and NasDem Party - also performed well this year, which could pave their way to greater power in the next administration.