While serious thinkers in the United States and China appreciate the potential impact and implications of a trade war between the two countries, the danger is if either side makes a miscalculation, Finance Minister Heng Swee Keat said.

This could have dire consequences, destabilising the global economy, and have an unpredictable impact on financial markets.

"What I hope does not happen is any miscalculation, because in a major negotiation like this, the risk of brinkmanship is always there," Mr Heng said in an interview with Singapore media yesterday evening.

Trade talks between Commerce Secretary Wilbur Ross and Vice-Premier Liu He ended on Sunday without any deals announced. Following the talks, China warned that any agreement to buy more American goods will be void if the US goes ahead with sanctions.

The two countries are locked in a dispute over the massive trade surplus in China's favour, and have threatened to impose tit-for-tat tariffs on goods worth up to US$150 billion (S$200 billion).

While negotiations between the two are ongoing, Mr Heng said that it was important for the "rest of us" to strengthen support for free trade.

Second, countries need to address structural issues in their economy, so that workers who lose their jobs can be retrained and employed.

After arriving in Nanjing last Friday, Mr Heng visited Chinese companies there and in Shanghai to see how they were using AI technologies. He travelled to Beijing on Tuesday. Yesterday, he met state councillor Xiao Jie and China Investment Corporation president Tu Guangshao. 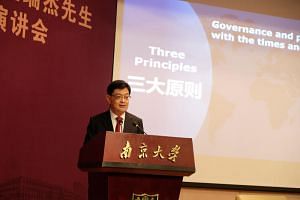 Mr Heng said he and Mr Xiao had a "very good meeting" and they discussed strategic projects their countries can embark on, such as the Belt and Road Initiative, the internationalisation of the yuan, and innovation in science and technology.

In Nanjing, the Chinese referred to Mr Heng on more than one occasion as a contender to become Prime Minister. Asked about this, Mr Heng said building relations with China does not depend on the "impressions (the Chinese have) of particular individuals". Instead both sides must have an understanding of their common interests and how they can pursue these together, he added.

This was the foundation set by founding PM Lee Kuan Yew and Chinese leader Deng Xiaoping, and successive leaders on both sides have built on this over the years.

Today, he is scheduled to meet Finance Minister Liu Kun and other senior officials. He leaves for a working visit to Japan tomorrow.