NANJING - China has been very restrained in its response to the ongoing trade dispute with the United States, Finance Minister Heng Swee Keat has said.

This was a "good thing", Mr Heng said in response to a question on the dispute at a Nanjing University dialogue on Monday (June 4).

"A trade war will benefit no one, not even the country that starts it," he said.

His comments came after US Commerce Secretary Wilbur Ross and Chinese Vice-Premier Liu He concluded two days of talks over trade issues in Beijing.

The two countries are locked in a dispute over the massive trade surplus in China's favour, and both sides have threatened to impose tariffs on goods worth up to US$150 billion.

Mr Heng said on Monday that a multilateral trading system with a set of rules for all would be the "best for everybody in the world", pointing out that free trade agreements and regional trade agreements were important building blocks for such an open, liberal system.

But he also said that the issue with free trade was that the benefits were spread widely, but those who lost out would feel the pain keenly. 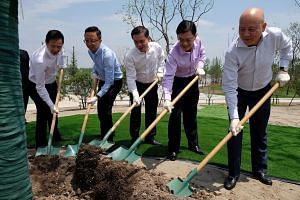 Many consumers, for instance, benefited from better products at a cheaper price when Walmart imported products from China, but those who worked for companies which lost out because of the competition stood to lose their jobs.

"It is not easy to maintain the momentum for free trade because the losers will feel very angry, and they will protest, they will lobby their government and say, 'Please do something about it'," he said.

He added that as countries embarked on structural reform of their economies, they must also look at how to take care of their workers.

On Monday, Mr Heng took questions on a range of topics including Singapore's development, artificial intelligence and the upcoming US-North Korea summit in Singapore.

Asked about the secret to Singapore's success, Mr Heng said that the country's first-generation leaders focused on developing the economy and keeping Singapore open, instead of imposing tariffs to protect certain industries.

He was also asked about Singapore's future plans to cooperate with China, after the success of the Suzhou Industrial Park, a government-to-government project of the two countries, located in Jiangsu province which has Nanjing as its capital.

Mr Heng said both countries could work together in helping Chinese companies internationalise and on the internationalisation of the renminbi as well as on the Belt and Road Initiative (BRI).

Chinese President Xi Jinping had, in 2013, proposed the BRI to build infrastructure such as roads, railways, ports and industrial hubs along modern versions of the ancient land and sea trade routes linking China to Africa and Europe.

"I hope that with the BRI, China can also play a very active role in the building of infrastructure and connectivity in the region and whole of Asia," Mr Heng said.