Beijing warns promise to buy more goods will be void, as both sides finish two days of talks

China has warned that agreements to buy more American goods will be void if Washington goes ahead with sanctions and other punitive trade actions.

"If the US implements trade sanctions, including raising tariffs, then all the economic and trade outcomes negotiated by the two sides will not take effect," said a statement carried by the official Xinhua news agency.

Beijing's stance, spelt out on Sunday (June 3), came after US Commerce Secretary Wilbur Ross and Chinese Vice-Premier Liu He concluded two days of talks on trade issues here that were overshadowed by the renewed threat of tariffs announced by the White House last week.

While both sides had separately described discussions as friendly and constructive, the talks did not yield a joint statement or specific details on an agreement made in the previous round of negotiations for China to buy more American farm produce and energy goods.

The Xinhua statement instead said that details of implementing the Washington consensus were subject to confirmation by both sides.

"The achievements reached by China and the United States should be based on the premise that the two sides should meet each other halfway and not fight a trade war," Xinhua said.

An apparent truce was reached in Washington last month when Mr Liu said the two sides would discuss ways to enhance trade instead of slapping escalating tariffs on each other.

But in a surprise move last Tuesday, the White House said it would proceed with imposing tariffs on US$50 billion (S$66.9 billion) worth of imported Chinese goods, with the final list to be announced on June 15.

The White House also said it will pursue tighter restrictions on Chinese investments and enhance export controls to protect US technology and intellectual property.

On Sunday, Chinese media reports framed the lack of concrete outcomes in the latest round of talks as Beijing's way of driving home the point that no substantial discussions can take place when the threat of tariffs looms large. 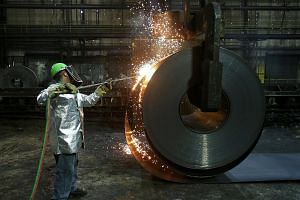 Keeping an eye on trade tensions, key data and geopolitics

Nationalistic tabloid Global Times said in an editorial that the US ploy of alternating between threats and offers to negotiate showed that it may change its position at any time, and China must be prepared for a long-drawn trade conflict.

"It seems that in Washington, there are still some people who want to unilaterally obtain additional benefits - to have their cake and eat it too," it said.

Economists agreed, noting that Washington's conflicting signals had done more to damage its credibility than to convince China to make additional trade concessions.

"It is very clear that China has no interest in progressing the talks if the US insists on issuing a tariff announcement in mid-June," said ING's economist for Greater China Iris Pang. "This round (of talks) was actually a regression, especially if it does not convince the US to move away from tariff actions."

Separately, Treasury Secretary Steven Mnuchin was the target of US allies' ire at the weekend as new US tariffs of 25 per cent on steel and 10 per cent on aluminium took effect.

At a gathering of G-7 leaders in the Canadian ski town of Whistler on Saturday, finance ministers from six of the world's largest economies asked Mr Mnuchin to convey their "unanimous concern and disappointment" to US President Donald Trump over the latest trade actions, which they said were harmful to the world's economic development.

A version of this article appeared in the print edition of The Straits Times on June 04, 2018, with the headline 'China: Trade deals off if US goes ahead with sanctions'. Subscribe
Topics:
More
Whatsapp Linkedin FB Messenger Telegram Reddit WeChat Pinterest Print Purchase Article Copy permalink