BEIJING - China aims to be a strong trading power by 2050, a senior official said on Sunday (March 11) as the country seeks to extend the reach of its regional and global influence.

"We are big but not strong enough," said Commerce Minister Zhong Shan, referring to China's status as the world's No. 2 economy and a major trading partner to most nations.

"We aim to stabilise our position as a big trading nation by 2020, transform into a strong trading country by 2035 and finally become an economic and trade giant by 2050," he said at a press briefing on the sidelines of the ongoing annual parliamentary session.

Under its signature BRI, China will focus on turning major investment and foreign aid projects into shiny "Silk Road pearls" that are beneficial, demonstrative and popular among all parties, Mr Zhong said, without naming specific projects.

Chinese businesses will be encouraged to bring e-commerce, big data, cloud computing, and artificial intelligence services to countries along the BRI trading routes to help them develop a digital economy and integrate into the global economy. 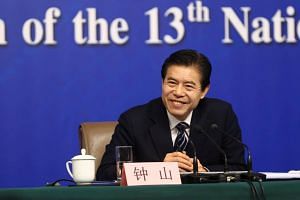 NPC 2018: China says trade war with US will only bring disaster to global economy

Mr Zhong stressed that future outward investments will be focused on the BRI and pledged to continue to rein in irrational overseas investments.

Last year, China's outbound direct investment registered a sharp 29.4 per cent drop to about US$120 billion (S$158 billion) as the government cracked down on speculative investments in property, sports and entertainment.

He noted that China's overseas investments have diversified from labour-intensive projects to include those that are technology and capital intensive, and more investments have flowed into bigger companies.

Region-wise, it is no longer heavily focused on developing countries as many investments have also been pumped into developed nations.

Another major initiative that will allow China to play a bigger role in global trade is the China International Import Expo, to be held in Shanghai for the first time in November.

Mr Zhong told reporters that the expo shows China's resolve to "actively open up" its market to the world amid rising protectionism and challenges to the multilateral trading system.

He described it as a "practical action" to support economic globalisation and trade liberalisation.

"The determination and confidence to open up to the outside world reflects China's self-confidence and China's responsibility in this new era," he added.

More than 60 developed, developing and least-developed nations have registered to attend the fair and the commercial booths have been overbooked by 20 per cent.

Mr Zhong used an often-used musical metaphor to stress that the China-initiated expo is not a Chinese "solo" but an international "chorus".

"We will provide assistance and support for participating countries and firms, provide convenience for exhibitors, and exempt the least-developed countries from participation fees," he added.